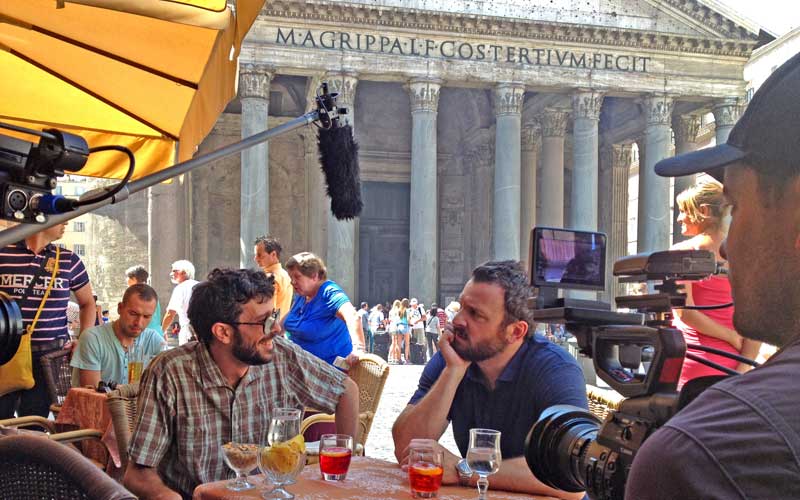 Spending your life as a global pub-crawler and star of your own drinking reality shows is not as easy as it looks. Just ask Zane Lamprey; he’s been at it for almost a decade. Like a phoenix of alcohol, Zane keeps rising from the ashes again and again. His shows have worked, even if the networks they’ve been on in the past haven’t.

This time around, Lamprey turned to his cult fan following to help raise money on Kickstarter to produce the show. The result is Chug, his third “drinkation” series, combining drinking and travel, and the first Kickstarter-funded series in history to air on a TV network.

Zane and his wife Mel Schilling, the series producer, are hoping that Chug is the charm, as is the backing of a more venerable network, National Geographic Channel, where the new series debuts tonight at 10:30 ET/PT.

It all started about ten years ago when Lamprey auditioned for a part in a show called Restaurant. While at that audition, Zane instead got tapped to do a show called Three Sheets. “The guy said, ‘You travel the world and drink,'” Lamprey explained to reporters. “I’m like, ‘Yeah, sure.’ But you know in Hollywood, you get those ‘we’ll do lunch’ kind of things. But they were from Seattle, so they actually did what they said they were going to do, and they called me.”

Zane spent three seasons with Screaming Flea Productions, filming Three Sheets in exotic drinking locales all over the world. The show originally debuted on MOJO HD, but they went out of business in 2008, and the series’ future was uncertain. (Spike airs repeats, which have also been broadcast on Travel Channel).

“We did a ‘Save Three Sheets’ campaign in L.A. and New York City,” he explained. “In L.A. about 700 people showed up. In New York there were about 1,000. We walked through the streets chanting and marching. We decided this was a great excuse for a bar crawl.

“But Mark Cuban was one of the people on our crawl. He’s a fan of Three Sheets, so after that ran its course, we did a show with Mark Cuban called Drinking Made Easy on his channel HGnet.”

Drinking Made Easy allowed Zane and his college friend/sidekick Steve McKenna to weave around the U.S. in a domestic drinkalogue show, and the fan base kept growing. This series upped the ante on the sophomoric drinking component, explained Zane’s wife Mel in an interview, because “Mark Cuban definitely wanted wild. His other shows on his network were far crazier than ours.”

When HGnet went out of business, Zane pitched a new show, Chug, around town, but couldn’t get any bites.

Kickstarter to the rescue, kind of

“I was chatting with my mom on the phone—her in Syracuse, me in L.A.,” Lamprey told reporters. “She said that maybe I should try a Kickstarter like Veronica Mars. I politely told her that she should go shovel her driveway and leave the Hollywood business to me.

“Then I hung up and went and looked at Kickstarter. It was the second or third day of Veronica Mars’ [movie project campaign]. Her goal was like two million, and by the third day, they had five million, plus or minus. I was sold!

“So we did it. It was not as easy. We hit our goal on the 39th day of our 40-day campaign.” Chug ended its campaign with a total of $591,804 from 8,177 backers. That sounds great, but they had to give 5 percent back to Kickstarter and another 5 percent for credit card fees. And then they spent about $200,000 on fulfilling promises to the backers—t-shirts, hoodies, posters, medallions, parties in New York City, Chicago, and L.A., plus shipping and travel to the parties.

“The Kickstarter money got us about halfway to completing the show,” Zane said in an an interview. “So, I ponied up the balance and spent my life savings (every penny) on the production.”

They shot the first episode in Kuala Lumpur—a city not exactly known for its drinking culture—and shopped it around again. Once executives got a look at the new series, a number of networks were interested. “In the end,” Zane said, “Nat Geo was the one who was willing to fight for it. They said that they would love it, feed it, and give it hugs. So, we happily went with them.”

It wasn’t a sale in the traditional sense because DVD’s of the series had already been distributed to Kickstarter supporters. “It was an ‘acquisition,’ more of a licensing deal,” explained Lamprey. “So, I didn’t make back all of the money I put into it. But with a second season order, I’ll consider it a complete success. It’s a very exciting time—but also very scary.”

Not as glamorous as it looks on TV

“It could be argued,” wrote Neely Tucker in The Washington Post, “that Zane Lamprey has the greatest job in America.” It sure looks that way when you watch any of his three drinking shows, especially Chug. In the first six episodes of the new series, he travels to Kuala Lumpur, Sydney, Fiji, Vienna, Rome, and Budapest, and uses his charm to drink his way into the hearts of the locals.

Mel, however, gave me a glimpse of the other side of glamour: “Glamorous, huh? If people only had the ‘real’ picture! (Which, quite frankly, they don’t actually want.)

“I’ll tell you what, no one wants to change places with the Zane or Mel who are in the office every day until late. Heck, Zane goes in every Saturday and Sunday that he is in town. But we don’t put pics of that on social media, do we?”

Schilling began traveling with Zane during the first season of Drinking Made Easy, when they shot it along side a live comedy tour, out on the road for 87 days straight. “This meant two crews, about 17 people, two buses,” she explained. “One crew was responsible for the production of the nightly comedy stage show [The Drinking Made Easy Comedy Tour] and the other for production of the television show.

“Zane and Steve were out filming [and drinking] each day, and then had to return at night and pull it together for the live show. The buses drove us to new cities every night. It was insane.”

Mel was originally along for the ride during Drinking Made Easy‘s first season, taking photographs and providing support where needed, until they finally figured out “that the two producers in charge were spending more time reliving lost college years and visiting strip clubs than they were preparing for a television show. I stepped in. Then I produced season 2 and 3.” She continued on to produce the Chug series.

What makes Chug different from its predecessors—especially Three Sheets, whose premise was essentially the same—is that Chug is more mature. Gone is the Mark Cuban-inspired wildness of Drinking Made Easy and the veiled and not-so-veiled drinking games of the first two series. (Although if you know those games already, you could no doubt adapt them for Chug.)

Like Three Sheets, the title Chug conjures images of drunken revelry and chugging drinks, but it ostensibly also comes from the mode of transportation Zane uses between shoots: a train. Although the show definitely has more chugging of alcohol than chugging of trains, it focuses more consciously on cultural exploration and getting to know people.

“I’m a conduit for the culture and people,” Zane explained at dinner after the screening. “Once they open up, I shut up.” 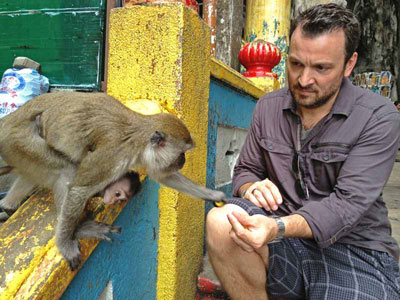 Still a lot of fun and still looking for drinks, in Chug, Zane is more thoughtful, and he eats more. (Food “makes the show more friendly, especially for the networks,” Mel told reporters.) The humor in the show seems more organic, less sophomoric. But Zane is still Zane: irrepressibly energetic, enthusiastic, and curious.

Lamprey tells the two old Aussies he’s drinking with at the Wollombi Tavern, during Chug‘s second episode, “Our show is a drinking show, and some people misconstrue it a little bit and think we’re going out there to party and have a good time, and in fact we are to some degree, but we’ve found that having a drink with the locals is the best way to learn about what it’s like to live in that community.”

In episode one of Chug, Zane drinks Palm Toddy, which a Malaysian has just shimmied barefoot up a tall palm tree to tap. The sweetness of the liquid, which has been fermented from yeast in the air, immediately attracts squadrons of flies that have to be strained out of the drink.

Zane described the Toddy to reporters as “really gritty, cereally stuff. It was OK, but I wasn’t, like, excited to drink more. But they were so excited to have me drink more that . . . .I try to be honest whenever I can, but I’m not going to hurt somebody else’s feelings.” The show is clearly not all about catching a buzz.

Lamprey maintains that he’s “an entertainer first and an educator somewhere down the list,” but Chug is both educational and entertaining. Who knew that many Malaysians say “Hirup!” instead of “Cheers!” or that a gang of kangaroos is called a “mob”?

“I want a true local experience,” said Zane over dinner. “The people who make these products are so passionate and they pour their passion into what they make. You are literally drinking the fruits of their labor.”

Zane and Mel pour their passion into what they make too. “Television is an escape for a lot of people,” Mel told me. “And, to some degree, if I don’t produce a show that causes people to want to change places with Zane, then I might not be doing my job properly.”

Nancy Barber teaches writing at Stetson University. She worked as a journalist before getting an M.A. in English from Stetson and an MFA in poetry writing from the University of Florida.