Top Chef Duels: a near-perfect spin-off, except for Curtis Stone

When Bravo announced Top Chef Duels, it was called Top Chef Extreme, and it sounded potentially unpleasant, referring to “the biggest, boldest and most talked-about personalities” and “extreme culinary challenges.” The actual result–like the new title–has thankfully been more subdued than the “extreme” announcement suggested.

The show is the best Top Chef spin-off to date, a fierce but friendly competition between Top Chef contestants who, with a few exceptions, are those who it’s nice to see back again.

Friendly competition is most welcome and really affects the feel of the whole series. While the panel is deliberating, the two chefs sit down to eat each other’s dishes and talk. It’s a small thing but one that really works to emphasize that these are professionals who respect and even like one another.

Competition series needs strong challenges and structure, and though it’s just a modified version of Top Chef‘s format, the make sense. First, the chefs face off in two $10,000, half-hour challenges that they design for each other; then, they create a three-course meal and the judges select one competitor to move on to the finale. (How exactly tonight’s finale will play out isn’t clear, but all of the winners will appear together.)

Allowing the chefs to create their own challenges has worked especially well, because they have to craft something they know is doable–and hopefully winnable–yet will also trip up their competitor. Some contestants have been more up to the challenge of creating a challenge, adding twists and layers that speak to their own strengths. For example, Kevin Gillespie challenged the always-fun Art Smith to butcher half a pig before making something out of pork, all in 30 minutes. But even when they just choose an unexpected ingredient or style of cooking, it’s fun to watch a chef try to out-do another at their own game.

For the main challenge, a three-course meal that’s usually themed to the guest/celebrity judges, they work with a sous chef, making this less like a reality competition and more like a real kitchen. That helps the chefs up their game. Dishes are served simultaneously, so they’re directly compared at the table, underneath large black and white photos of the two chefs. It really is a direct face-off from start to finish.

Speaking of the production design: For a show that’s confined to a familiar studio set, it’s visually interesting thanks to slow-motion footage and a lot of attention to what each chef is doing. The production design team also does well transforming the studio, even briefly, to thematically match the main challenge, such as the additional of red and blue flashing cop car lights for the meal judged by the cast of Brooklyn Nine-Nine.

Then there’s the host. So, let’s talk about Curtis Stone. While I rather liked him as a contestant on Celebrity Apprentice, I’m not a fan of his hosting. Though he handles all of his jobs competently, it actively turns me off. 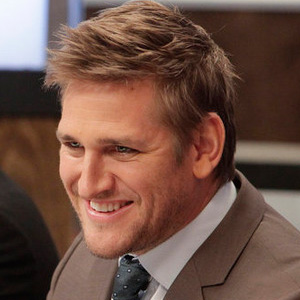 There’s something awkward about the way he transitions from his hosting duties to condescending lectures, which are directed at both the chefs and the other judges. I know he is a chef, but it just doesn’t feel like he’s earned that, and I want him to be more objective as a host.

Worse, the editors often give him more attention than the real judges; perhaps that’s because he is really good at describing food, but the result is an odd balance that gives us way more Curtis Stone than there should be. I don’t want him to have a vote during the challenges, I want him to introduce them and then back away quietly. Instead he kind of stomps all over the other judges, including Gail Simmons, who is, of course, spectacular.

Part of my dislike of his hosting carries over from Top Chef Masters, where he’d walk the guest judges through blind tasting by giving non-stop commentary that often overshadowed the guest judge’s comments. It made me question how much he was affecting the outcome of the competition. A host should have personality, and he does, but there’s a line past which the host becomes the show, and Curtis Stone is too far on the Jeff Probst side of the line.

Alas, NBCUniversal loves Curtis, having him host Top Chef Masters and Around the World in 80 Plates and make appearances on all kinds of other NBC shows, and he is an improvement over early, failed Top Chef and Bravo competition hosts. If he just pulled back a little, it would be fantastic.

Still, even with that blemish, this is a competition worthy of the title Top Chef, a good reminder of the regular show’s strengths even as it ages.