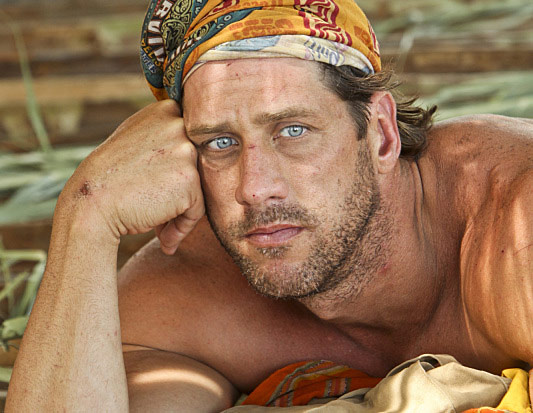 With significantly better editing and a stronger narrative arc, plus some unexpected challenge drama and a satisfying Tribal Council, Survivor San Juan Del Sur emerged from the dark cloud that hovered over it the first two episodes. The cast is still weak overall, and the season is still being dominated by one tribe, but at least there’s been a shake-up that shows the possibility of life.

Both challenges were decent but mostly served as a venue for cross-tribe drama, which started at the Exile Island challenge when Jeremy discovered John Rocker had not protected Val from being voted out. “I did everything I could, brother. I swear to you,” John said, and he was only half full of crap. But he was trying to do damage control because Jeremy talked directly to the other tribe and tried to shake them out of their dominant men’s alliance.

I’m still rather hostile toward Exile Island and particularly the family vs. family challenge, so much so that it makes me want Redemption Island back (and yes, a year ago I was complaining about Redemption Island, too, so perhaps Exile will grow on me, or perhaps I’m impossible to please).

But even though it has led to cross-tribe drama, right now it’s just an arena for Probst’s overwrought and insufferable commentary. Wes, once just a tiny sperm cell that came out of Keith’s penis, now trying to pay his dad back for giving him life by destroying him in this challenge! Keith, trying to figure out how to keep his insanely brittle old man body balanced so he can avoid the shame of being whopped by his own son on national television!

Back at camp, Jeremy educated his tribe about John Rocker’s past: “He said a whole bunch of racist and homosexual stuff and got in huge trouble.” Though his words failed him, Jeremy’s point was clear. One of the other guys on the tribe whose name I don’t yet know since we’ve had no character development this season summed it up: “So he’s a bigot.”

I know many of those who still watch The Amazing Race (tangent: I tried again this season and just couldn’t) weren’t thrilled with the casting of the Twinnies, but I particularly loved Natalie this episode, starting when she told the camera, “I just want the other tribe to grow a pair of balls and just stand up against him.”

But it was after the immunity challenge–a fun combination of familiar Survivor challenge elements–that Natalie really went off, challenging the other tribe to vote Rocker off. “Change it up,” she said, before Probst even had a chance to hand over the immunity idol. “I’m talking to you–following a racist,” she said to the other tribe, while baiting Rocker: “Why don’t you say something homophobic or racist like in your past?” (When Julie feebly tried to defend her man and mentioned his past comments, Probst said, “What article are you referring to?”, and that was about the most disingenuous thing he’s ever said. Not that I wanted him to recap it, but if half the cast remember it, please.)

At first, Rocker didn’t take the bait, letting his tribe handle that. Dale said, “you can run your mouth all you want, we’ll still back up John,” which is admirable from a team perspective and pretty stupid from every other perspective.

Then John Rocker delivered what the producers must have hoped would happen when they cast, you know, John Rocker: a sexist threat of violence. “If you were a man,” he said to Natalie, “I would knock your teeth out.” I loved Natalie’s reply: “Knock me out,” she said. “I’m not scared of you like the other guys in the tribe.”

As an aside: Notice how silent Jeff Probst was during most of the confrontation. Actually, I want Jeff Probst to notice that. Often the best thing he can do as a host (and producer, and showrunner) is get out of the way instead of trying to make something happen, and the show is so much better when things just happen.

Rocker’s threat is what appeared to conclude his time on Survivor, shaking certain alliance members’ faith that he’d be a worthwhile ally in the future, especially with so much hostility from the other tribe.

In badly spliced audio, Rocker appeared to half-apologize for what he said in that fateful Sports Illustrated interview, because when he mentioned it he said “which I regret. I shouldn’t blab my mouth so stinkin’ much.” Does he regret the things he said, or that talking got him in trouble? He did try to argue that he’s not homophobic because of his relationship with Josh: “Natalie called me a homophobe today. Really? My closest ally and closest friend on this tribe is a gay man. Actions versus accusations don’t really gel.” Kind of like that sentence doesn’t really gel.

John Rocker’s exit was unexpectedly generous and cordial, considering his previous behavior: “Well-played,” he said, and as he walked away from Tribal Council, said, “I had a damn idol right in my pocket, too.”

When the plan to vote Rocker out came together, it was a really potent reminder of the trust necessary to play the game, and the paranoia that can easily set in. Baylor was thrilled when Josh and Wes suggested a plan, and not only because she was otherwise probably going home, but she also knew that they could be playing her, facilitating her exit.

Baylor’s body language at Tribal Council suggested she was not confident about how the vote would go until the very last minute, when she breathed out and finally relaxed. As she’d said, their vote did “get the dark cloud off of whatever is covering us”–and this season.