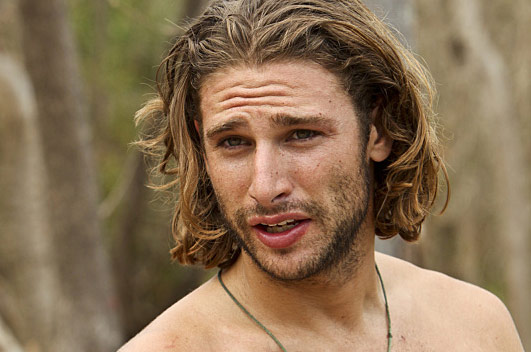 What an immensely satisfying episode of Survivor. It was remarkable that the episode was almost entirely self-contained, and to appreciate what happened, you needed no context or history. It was simply the story of the rise of a self-appointed leader and how his hubris created his spectacular fall. Can stupidity be a tragic flaw?

If Drew hadn’t clumsily thrown the challenge, he wouldn’t have been vulnerable. Then again, if he hadn’t been an arrogant prick to everyone, he also wouldn’t have been vulnerable. But what terrific television it was watching him smash his alliance apart using his skills of argumentation, which consisted of talking over other people and demanding they follow his plan. Drew was so wonderfully ignorant of what he was doing that he told two other guys that Kelley should be voted out while Kelley stood right behind him, a look of disbelief on her face.

All of this began at the duel, where Drew tried to trade an unused flint (they found their lost one) for fishing gear. His tribe seemed embarrassed, but as he told us, “you have to make decisions that nobody else wants to do” (um, what?) and “without me these people would be nothing” (just wait a few days and they’ll test that theory, bro).

Probst dismissed Drew’s offer. “I am taunting you,” he said. “You made the trade; put the flint back.” Although Probst did later yell “Drew is single-handedly losing this for his tribe” at the challenge, and asked Julie what she thought of her tribe standing to applaud John Rocker’s absence, his restraint was notable. He previously turned the flint trade into a spectacle, and Tribal Councils of late have been more about Probst lecturing than listening, so this was a welcome change. Whether there was actual restraint or the editing just minimized Probst, it improved the episode significantly.

What a dramatic difference there was from the first two episodes of the season, in terms of everything from Probstian interference to the editing. Suddenly, all of the b-roll shots of animals were back. There were so many shots of cute animals–WHAT WAS THE TINY THING WITH THE THINGS ON ITS BACK–that it was almost too much, and they didn’t quite fit thematically in the same way that they used to. (The editing this season is just so weird compared to the previous seasons, which always had constantly outstanding work. If you are an editor or know what’s going on, get in touch.)

Just watching the tribe fall apart at Tribal Council was terrific. Natalie concluded by saying, “Oh Jeff, we are a hot mess,” and she was right. Seconds before, Jon said, “I honestly am so confused what name I am supposed to be writing down right now.” It was like season-one Survivor all over again, with four people getting votes.

Drew’s journey to his blindside began at Exile, where challenge-winner Jon sent him, and where Drew, buttocks blurred, repeatedly professed that he would not hit on Jaclyn. Because he’s “a ladies’ man,” Drew also decides that he must throw the immunity challenge so that he can vote out those devious women on his tribe, who must be gunning for him, just like they must be obviously lusting after him, because who wouldn’t get turned on by his sexism, logic, and masterful use of the English language?

As the women repeatedly pointed out, they couldn’t possibly act alone to vote out the men, because they’re outnumbered. Plus, there was no women’s alliance, at least until Drew started insisting their was. That’s when they teamed up with Jeremy and voted Drew’s dumb ass out. The fact that the other guys voted randomly (for Keith, Julie, and Kelley) was just icing.

Interesting that it was Jeremy who joined in the vote-out Drew plan, considering he that he was skeptical about it (“Yes, he’s a moron, but that’s a big move”) and was furious at Keith, who 1) looked for the idol by doing the equivalent of kicking dirt around, 2) decided it must not be there and told others Jeremy had it, and then 3) went back and found it after it leapt out of the ground at him, like a spring-loaded present.

But the best part was Drew’s arrogance biting him in his blurred butt. “I threw the challenge today because we need to go to tribal and get some of the snakes that are in our team off. If I don’t want to win, we’re not going to win, and that’s what makes me the kingpin of our tribe,” he told us. “I don’t know if they knew I was threwing it but I could care less.” Kind of like you couldn’t care less about grammar?

After the challenge, which broke Coyopa’s losing stream, Alec declared, “I knew it was our day.” Considering all of the baggage he unloaded on Baylor regarding his relationship with his brother (and father), I can’t imagine what he’ll think once he discovers that his team’s victory was a result of his brother threwing the challenge.

The too-perfect part of all this is that being voted out actually gave Drew evidence that he was right and that the women weren’t to be trusted. He is such “a bad-ass and a manipulator of this game” that he manipulated his own exit.