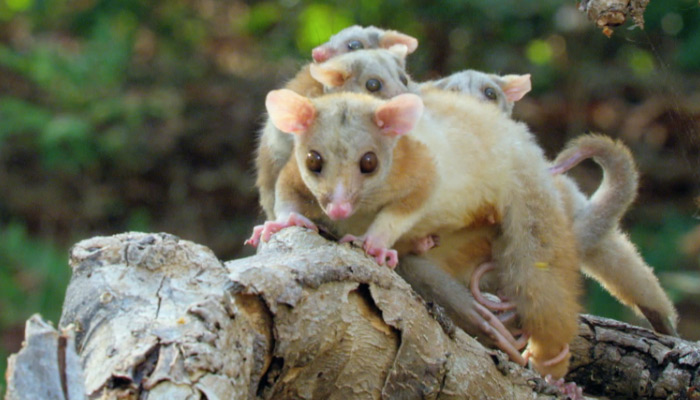 Besides the exceptional narrative arc of Drew’s blindside, the fourth episode of Survivor San Juan Del Sur is most notable for the brief but remarkable appearance of four animals, three of whom were riding on the fourth’s back. But what are they?

Alert reality blurred reader Michael Corbett identified it in an e-mail to me as a Derby’s woolly opossum, whose scientific name is Caluromys derbianus. Looking at images of those online, that seemed to be correct.

But something happened when I went to grab a screenshot of its appearance on CBS.com. Just when I was close to being driven mad by watching the same ads over and over again as I tried to cue the moment when it appears (about 13:07), CBS Sync popped up next to the video. It had a clear photo of the creatures along with their name: “Common Opossum (Didelphis marsupialis).”

That’s a remarkably helpful feature. However, it also seemed to be incorrect. Just compare the Didelphis marsupialis (Common Opossum) to the Caluromys derbianus (Derby’s Woolly Opossum).

Of course, I am not an expert in South American mammals. So I asked one.

I knew I’d found the right place because the Smithsonian’s Division of Mammals in the Department of Vertebrate Zoology at the National Museum of Natural History illustrates its web site with a picture of a tarsier, my favorite animal in Survivor b-roll footage.

Alfred L. Gardner, a curator with the U.S. Geological Survey at the Smithsonian, told me definitively that it was “Caluromys derbianus, an arboreal marsupial called Derby’s woolly opossum.”