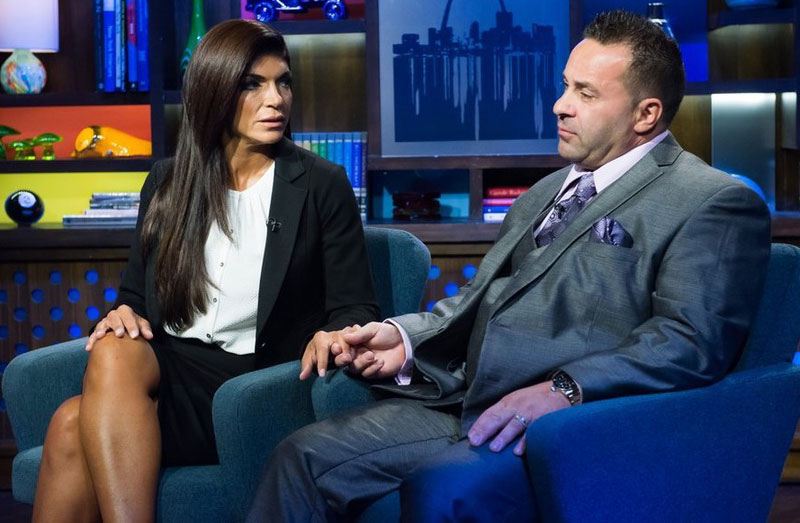 The Real Housewives of New Jersey cast members Teresa and Joe Giudice are going to prison, but first they spent hours with Bravo’s Andy Cohen for a special that aired last night and concludes Thursday.

In March, the couple plead guilty to bankruptcy fraud, mail fraud, and wire fraud despite having previously insisted upon their innocence. Just over a year ago, they appeared on WWHL and insisted they were innocent; Teresa said, “I haven’t done anything.”

At the time, U.S. Attorney Paul J. Fishman said, “With their guilty pleas, they admitted the schemes with which they were charged. Having now confessed their wrongdoing, the Giudices face the real cost of their criminal conduct.”

That cost is 15 months in prison for Teresa and 41 months for Joe, terms that will be served one after the other so their kids will always have a parent around. Joe may be deported.

Bravo divided their post-sentencing appearance into two pre-taped, prime-time specials titled “Watch What Happens Live: One on One,” though it was neither live nor one-on-one. The biggest surprise for me was not Teresa’s usual naiveté (she claimed she didn’t understand what the plea deal was, and also said she didn’t think her daughter would find out at school that her parents are going to prison). Instead, it was Andy Cohen, who actually asked tough questions, and never once blamed them on BravoTV.com viewers.

I recapped the conversation for HitFix, including Andy Cohen’s great interviewing work when Joe tried to dismiss his behavior as just signing papers the bank gave him, and Andy pressed hard with facts: “you were taking out false loans” and they were “phony W-2 forms.” It was a riveting half-hour if only because the Giudices kept surprising with the things they said.

While the show has previously gone too far with its exploitation of real life, the questioning and their appearance was not exploitative. Instead, it was insight into their behavior, even if it just revealed a kind of sad ongoing delusion, especially from Teresa. Joe, as usual, kept making himself look like an ass, whether he was joking about prison assault or asking Andy Cohen to price his suit.

While Housewives shows’ ratings have declined recently, perhaps because Bravo diluted its power by copying and pasting the format and turning virtually its entire lineup into Housewives clones while the originals increasingly rely on stupid stunts, the specials and this season of The Real Housewives of New Jersey is a good reminder of the series’ potential. At its best, it really does let us observe people in their real lives.

In Kate Aurthur’s must-read piece The Rise and Fall of Teresa Giudice, she writes that The Real Housewives franchise “became the inadvertent chronicler of the downfall of the artificially rich.” The Giudices’ prison sentence is certainly the most striking example of that downfall and of the artificiality of their wealth–and a reminder that, at its core, these shows are about something very real.