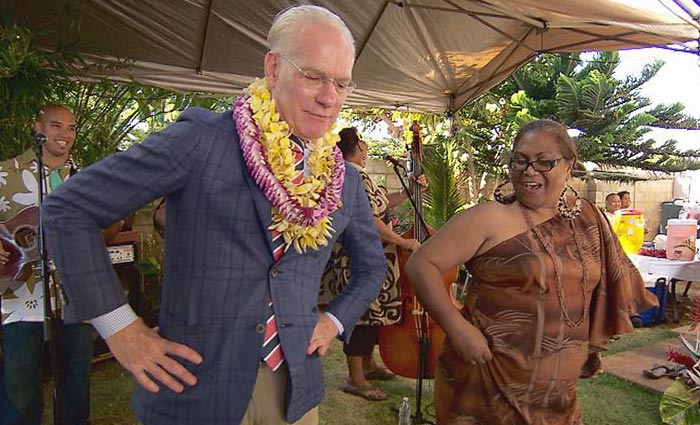 Tim Gunn dances during his visit to Kini in Hawaii. (Photo via Project Runway)

On the penultimate Project Runway, no one was eliminated, but the designers still showed work to the judges in order to have their dreams crushed. But first, Tim Gunn took them on a tour of Rome, and then visited them in their hometowns, or in the case of Sean, on his hometown public bench. Also, I am really loving this entire season. It’s the first in a while that I’ve been eager to watch every week.

Collections with a theme
The designers were required to create Fashion Week collections that were “inspired by the ancient city of Rome,” selected “for its incredible architecture, history, and culture”–and, of course, its sponsoring Best Western. I skipped several seasons, but I can’t recall when the finalists were given such specific direction for their collections.

Tim Gunn’s Guide to the World
Tim Gunn was a charming tour guide in Rome, even if he did seem to be reciting lines and facts. “Today we’ll visit what I call Rome’s greatest hits, starting with the Colleseium!” He reminded me of the narrators on Epcot’s Spaceship Earth attraction, especially Judi Dench, who now says, and I am not making this up, “Remember how easy it was to learn your ABC’s? Thank the Phoenicians!”

Something that wouldn’t fit in Sean’s cute but compact studio
Korina’s ego. (Which, the previews tell us, reemerges during the reunion–which she appears to storm out of! Just like she stormed out of the building on last week’s episode!)

Something more amazing than Tim Gunn hula dancing
There is no such thing. Unless if he did that while announcing that he was using his Tim Gunn Save.

Best storyline ever for clothing
Sean decided to use the story of Caesar in his collection, including a garment with fringe that represented and even resembled the aftermath of Caesar’s back-stabbing. Tim suggested the first few outfits were boring (“normal clothes,” Sean called them), so Sean fringed it up. The judges seemed skeptical about more fringe, but as Sean said, echoing a four-year-old, “Nina’s not the dictator of fashion and she can’t tell me what to do.”

Who said mean things behind Char’s back this week
Apparently because no one was left to say things about Char’s lack of talent, Kini told us in an interview, “I honestly don’t feel like Char is on the same level as me. She has a lot to learn still.”

Who has to redo his whole collection because the judges didn’t like it as much as they liked Char’s
Kini. The judges feedback to Kini was basically this: set everything you’ve done on fire and re-do it in the next 24 hours, okaythanksbye. Since it’d take him 10, maybe 15 minutes to sew the contents of a typical Target store’s clothing section, that might not be as much of a problem for him as the editing suggested, but it did really rattle him.