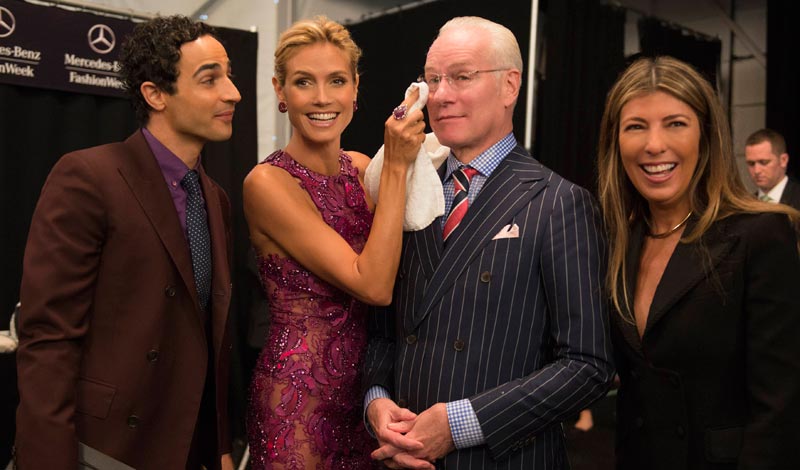 Project Runway ended a thoroughly satisfying season last night, one that had both drama and talent. The talent was so strong that Tim Gunn suggested the finalists were the best designers on the show ever, and any of the four would have been a satisfying winner, though the winner’s seemed to be the most cohesive and interesting. While the finale had the designers reworking their collections and included some backstage drama, it was perhaps the most sedate episode of the season. Next week Korina returns for the reunion and makes sure this season goes out on a high note.

Tim Gunn pisses off the casts of Project Runway seasons 1 to 12
“You are the most talented group of designers I’ve ever worked with and I’m so proud to be able to say we worked together,” he told the final four designers.

Work, work, work!
The designers each received $300 to spend at Mood to help them rework things after the judges ripped apart their looks, though Amanda opted out. Later, at Fashion Week, all four scrambled behind the scenes, especially when one of Amanda’s models changed her shoes (OMG), and Char made her models switch outfits and their order so much that they were making stink faces.

Char Glover, fourth place
While Nina said one of her Char’s looks resembled “a box of kleenexes” and said she was “trying too hard,” Nina did compliment Char’s collection: “you design real clothes. … that is your strength.” As opposed to what, doll clothes?

Kini Zamora, third place
Kini re-did most of his collection in two days after getting reamed by the judges, and the result was Nina telling him, “You try too hard” and Heidi saying that he had “too many ideas.” WELL WHOSE FAULT IS THAT?! HMM?!

Amanda Valentine, second place
Zach called Amanda’s work “the most original collection on the runway today,” but apparently being more editorial won Sean the prize. I’m okay with her loss: Amanda already got to show at Fashion Week during her previous appearance on the show, so had she won we would have had a bit of a Boston Rob situation.

Sean Kelly, winner
Look, Sean deserved to win for his amazing rainway dress alone. Nina Garcia said Sean’s Caesar-inspired collection was “the most editorial of the collections here,” and although she said “I do think you could do better,” the judges gave him the win. Zach Posen said, “I think you are the full package.” Heh, package.

Another thing Korina and I disagree about, besides everything
During the preview for next week’s reunion, she cries, “I cannot wait for this to be over.” No! I really don’t think I can get enough of her pouting, unearned arrogance, and storming out of places.

Even worse than Korina: “Project Runway Threads”
I really, really wanted to like the kid designer spin-off. But the first episode was awful.