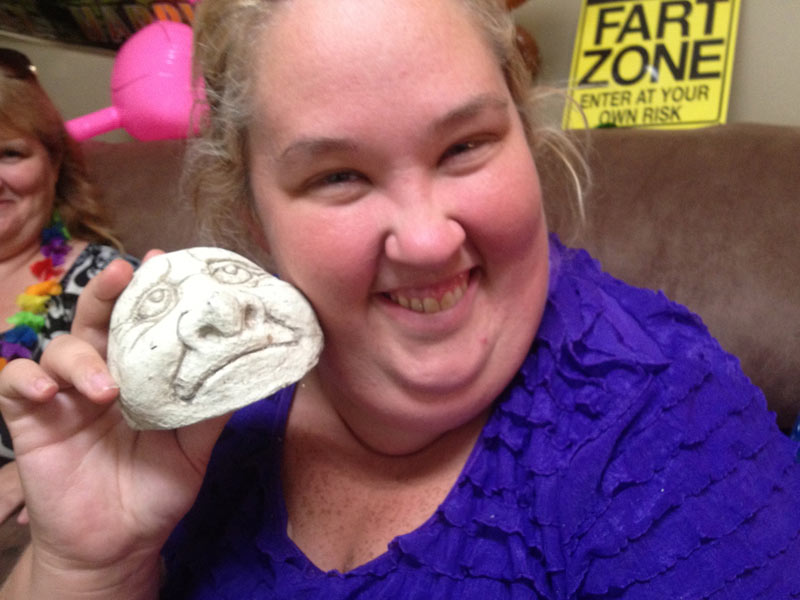 TLC’s once-hit series Here Comes Honey Boo Boo has been cancelled after a tabloid report said that star June Shannon, aka Mama June, is dating a man convicted of molesting a child, but she said she hasn’t dated him for 10 years, prior to his incarceration. The network said in a statement:

“TLC has canceled the series Here Comes Honey Boo Boo and ended all activities around the series, effective immediately. Supporting the health and welfare of these remarkable children is our only priority. TLC is faithfully committed to the children’s ongoing comfort and well-being.”

TMZ’s report, with its usual grammatically challenged writing, claimed that “Honey Boo Boo’s mom has been seeing [Mark] McDaniel for the last few months … sneaking away from production of the show and meeting up with him. We’re told she’s also been setting him up by buying him various gifts.”

However, in a video posted to Facebook late this morning, June said of her relationship with McDaniel, “that is my past; I have not seen that person in 10 years.” But she said that TLC told her “as of right now there will be no more production of the show.” Also in the video, she thanked fans and said, “the experience has been awesome to us.” She added that “TLC has kind of told us to hush hush,” apparently referring to her recent split with Sugar Bear.

Earlier, June wrote a Facebook note that said, in part, “It isnt true i promise my kids r #1 priority over anything else and I would never put them in danger period over this or anything else they r my life this is my past I left him 10 yrs ago for it and I wouldn’t go back.”

Both June’s daughter and the daughter of the man denied that there is a current relationship. “They are not dating, it’s been 10 years,” the man’s son told E! News. June’s 14-year-old daughter, Lauryn, aka Pumpkin, told Radar, “My mom left Mark 10 years ago. They haven’t seen nor talked [to each other] in 10 years.”

I asked TLC about the family’s denial and discrepancy with the report, and was told that they were only releasing the statement above.