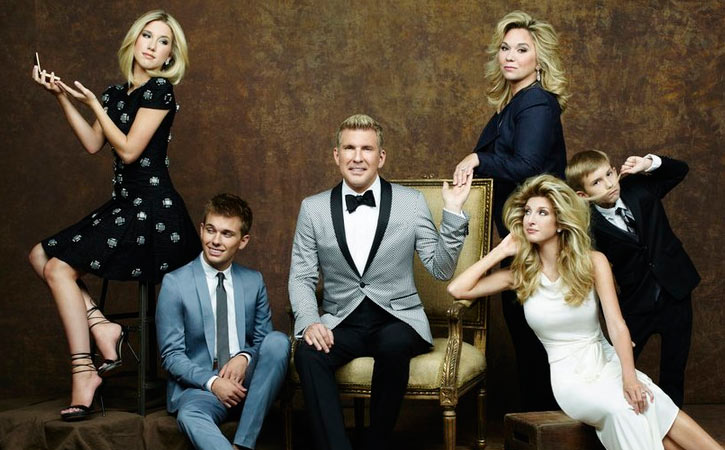 USA’s breakout hit reality show Chrisley Knows Best returns for its second season tonight, having successfully found comedy in reality. The show is more Osbournes than the fake, scripted Duck Dynasty–or at least, it’s more like early Osbournes. While the cast may be playing to the cameras, and while it is certainly produced and edited, it feels genuine and real in a way that most other comedic reality shows don’t. The half-hour episodes make for a surprisingly addictive series.

I talked with four of the family members–Todd and Julie Chrisley and their kids Savannah and Chase–this summer in L.A., during a break in the 12.5 weeks of filming for season two. During our conversation, Todd delivered quips as fast as he does on TV, and Chase looked at his phone; they were very much the same people that they are on television, a family that clearly adores each other and has fun interacting despite disagreements they may have.

Besides strong ratings for USA Network, the family also drew lot of criticism related to everything from their behavior to their past, including Todd’s prior business dealings; there was also plenty of wild speculation, the kind of myth-making reality show fans excel at. “Anybody someone says something that’s unkind about you, it has an effect,” Todd said, but compared criticism to getting vaccinations. “Eventually after having 12 of them, you know what to expect and it doesn’t sting any more.” He says that he’s trying to make sure his kids know that “no one gives them there self-worth, that comes from them; no one can take that unless you give that way.”

While Savannah said that “we don’t really pay any attention to” negativity and criticism, Chase admitted to me that he has a hard time not responding to trolls who are talking about his family. “As soon as I saw someone say something about one of them, I wanted to tweet back.”

The family found their way to TV when Todd was conducting unrelated business with the show’s eventual supervising producer, Annie Kate Pons, who met his family and was convinced they had to be on TV. She took the idea to Maverick TV’s Adam Greener, who’s worked on shows from Big Brother to Scott Baio is 45 and Single, and eventually a sizzle reel was filmed. A year and a half later, it was pitched to 10 networks, and nine made offers, Todd said.

Why expose their lives–and quirks, and wealth, and everything else–to the world? “We certainly did it for the branding opportunities, and the fact that we felt like we could contribute something to that landscape,” Todd told me. “We contribute a certain level of wholesomeness to that field–that we want the world to see that children should have accountability for their actions, and they should respect their parents, and that the parents should give the child a reason to respect them.”

That said, Todd doesn’t want people to parent like he does. “I don’t want anyone in this world to mimic my parenting or mimic my personal style, I want you to do what makes you feel the most confident in your position of whatever it is that you’re doing,” he said.

Why sign on to do the show? “There was definitely some hesitation,” Julie said. “I wanted to a) protect my family, and make sure that as a family unit we were safe and that it was the best thing for us. … Our focus was these children and making sure they were safe.”

Todd said that “every commitment that was made to us was fulfilled” by the producers and network, adding that “they’ve given us a voice within the process,” though when he’s gone to producers about potentially not including something that happens in the show, they’ve told him, “You said that it’s reality and we need to keep it that way.”

“They’ve never asked us to do anything on camera,” Todd insisted, referring to the producers. The family does “give them a list of things we know are going to happen. If we were planning a party or whatever, we know that in advance. But do you know that [Savannah’s] going to wreck a car? No, you don’t know that,” Todd said. “So, if the cameras are there, they’re picking it up–they pick it up, if they don’t, trust me, there’s a lot of things they don’t pick up because we’re going 24/7. … Camera crews don’t have that kind of stamina to keep up with us 24/7.”

He insisted it is “truly a fly-on-the-wall” show, although Julie also admitted that season one’s filming included a “week of pick-ups,” which isn’t typical for a straight documentary.

While much of the show does feel genuine, there were a couple moments during the first season that felt staged. I asked about the most obvious: the episode during which Todd throws Chase’s iPhone into a lake. After his dad confiscated the family’s phones for their time at the lake, Chase discovered the hiding place and took his phone back. When they go out on a boat, he’s texting, and when Chase is swimming, his dad discovers the phone and throws it into the lake.

Except: it’s a different phone. The iPhone Chase uses then and later is gold; the one Todd throws in the water is black, and looks like a prop, with its home screen visible even though it’s been sitting, unused, for quite some time.

Without hesitation, Todd explained that there was more that the cameras didn’t capture: after Chase found the hidden phone (“he goes and steals the damn thing back,” Todd said), Todd re-confiscated it, and then Chase bought a new phone: “so he goes to Walmart … and he gets one of them [pre-paid phones]. … Who thinks that your child’s that devious?”

Referring to the episode-one incident where he threw Chase’s laptop into the pool, Todd said, “that was $2700, do you think I would worry about throwing in a $600 phone?” That’s disposable income. Todd also welcomed the scrutiny: “That’s very observant. I’m glad you watch like that,” he said.

As to the show’s veracity, the family understands the skepticism. Julie told me, “I have watched other shows, and been like, ‘That’s so not real.’ And after filming our season, I was like, those things really happen. I can honestly say, they really happen to us.”