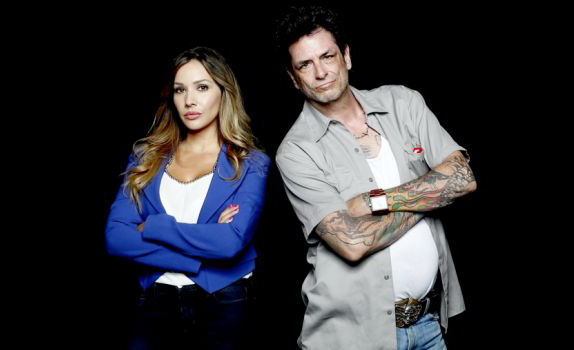 Dick Donato, aka “Evel Dick,” left Big Brother 13 because the show’s medical tests revealed that he was HIV positive. He will disclose that on tonight’s episode of VH1’s Couple’s Therapy , on which he’s appearing with his girlfriend, Stephanie Rogness-Fischer.

Dick told People that when he was on BB13, producers did medical tests, and called him into the Diary Room. They:

“told me that something was wrong with my blood test. They had done two HIV tests. One had come back positive and the other had come back negative. … When they told me, I just went numb … They had a car take me from CBS to my mother’s house. She was the first person I told.”

In 2011, CBS described his reason for leaving the show as “a personal matter.” Everything Dick said after leaving the show in 2011 lines up with what he’s saying today. He apololgized to CBS and Daniele but did not explain why he was leaving, saying that he received “bad news about someone I was very close with” which constituted “an emergency that my immediate attention” and said “the news hit me sideways and knocked me on my ass.” He didn’t offer details, but responded to rumors by saying, “Fuck you to you all you assholes who start these bullshit, malicious rumors.”

He suspects he was infected via unprotected sex with an unidentified woman, but talks about the stigma associated with the diagnosis and also what he hopes to do by disclosing this now:

“People are afraid to come forward because they’re afraid of the stigma of HIV. I’m not gay and I’ve never stuck a needle in my arm, but at this point, it doesn’t matter. We create a stigma around the disease that makes it hard for people to publicly say they have it.

[…] On one hand, I’m doing this for myself: I don’t want to hide anymore. On the other hand, I hope it will remind viewers to get tested, practice safe sex, all those things we know in the back of our minds but maybe don’t do.

[…] I knew it wasn’t a death sentence like it used to be. But it has still changed me. I do think about others a lot more now. I’m looking forward to going public with this, because maybe, just maybe, this can be the moment where I do something that really helps other people.”