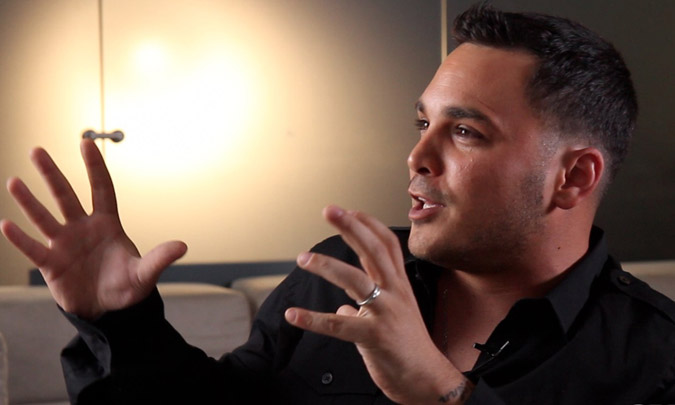 Going on a reality show may change a person’s life. But it may also leave a person wondering why their life hasn’t changed, why they’re not insanely famous and rich. What actually happens to most reality stars after their show ends and life resumes–often, a desperate search for fame, fortune, and/or meaning–is the subject of a new documentary by a former reality TV show cast member.

The Mole contestant Paul Grassi spent four years interviewing reality stars for The 16th Minute, which debuts tonight at 10 on AXS TV, the network that’s currently airing the UK’s X Factor. The result is mostly a warning to those who think reality TV will change their lives.

Survivor‘s Richard Hatch, Billy Garcia, Russell Swan, and Michael Skupin all appear, along with Big Brother‘s Marcellas Reynolds and Jersey Shore‘s Angelina Pivarnick. There’s also Grassi’s fellow The Mole contestant Nicole, who threatened to kill Grassi during their season and got fired from her job as a result.

They discuss their expectations and how they didn’t exactly match reality. What’s most interesting is how Grassi cuts between alternating perspectives: whether or not they blame editing, how famous they think they are, et cetera. There is honest reflection, delusion, and a combination of the two.

Billy, who was eliminated second from Survivor Cook Islands, insists, “I was, at that time, and maybe even today, the most famous person from my season, just from my look and the crazy way that I left.” Ironically, I didn’t immediately remember who he was until I searched and remembered what he did.

I asked Grassi if the documentary itself was perpetuating some people’s false sense of their fame, and he said, “100 percent.” He pointed out that “Billy makes his living off of being Billy from Survivor” and “any way to advance that, he’s going to take that opportunity. But he’s now the perfect example–there are no hundreds of people out there like Billy,” Grassi said–those who were on TV for just an episode or two but are still trying to capitalize on their fame, as pointless as that may be for some of them.

The documentary briefly covers the frequent gatherings of former reality TV show cast members, and Murtz Jaffer shows up to explain how he basically worked his way into those groups, and I wanted more of all that. There’s something interesting in how former cast members gravitate toward one another and feed each other’s egos but also act as a sort of support group.

By the time the documentary gets to a reality star faux wrestling match  in a sparsely populated high school gymnasium, this post-reality show life just seemed very sad. At the same time, though, the film also increased my respect for those who’ve 1) made this post-show fame thing work for themselves, and 2) just returned to their normal lives, disappearing from the public sphere.

Grassi told me that his film “is a true representation of what reality stars go through afterwards. A lot of people don’t believe [what’s on TV is] real, but [what happens afterwards is] as real as the people on the shows are.”