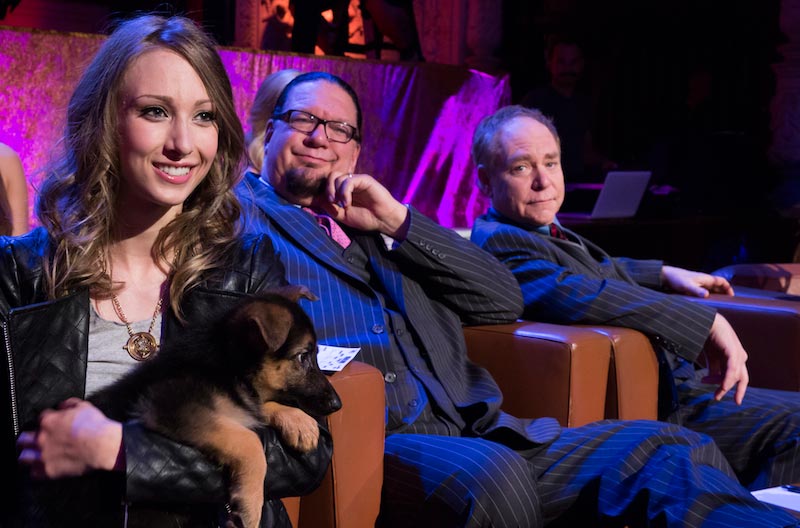 On Friday, Syfy announced it had ordered six more episodes of its competition series Wizard Wars, which will debut in January. I’d prefer it to be more than just six episodes, because the show is one of the network’s best reality series and I miss it already. It’s definitely the best of the small wave of recent magic-themed reality shows.

The CW’s Penn and Teller: Fool Us is simply a three-year-old show from the UK being rebroadcast in the US. The magic is decent, but the show is frustrating. The whole conceit is that Penn and Teller try to figure out how the trick is done, but they don’t actually share the critical information with the audience. That makes sense, but even when the performance is really strong, it means the show has a weird letdown at the end of every act because we have no idea why it had that outcome.

Another CW series, Masters of Illusion, is a 14-year-old series that has outlived both networks that it was previously broadcast on: PAX and MyNetworkTV (which brought it back in 2009).  The CW created new episodes that are hosted by Dean Cain, but it felt like the show could have been repeats, since it comes across as stitched-together acts of varying quality. There’s something to be said for its straightforward and simple approach–just magic act after magic act–but it was less reality TV and instead just a broadcast of performances.

Syfy’s Wizard Wars attempts something new, which is only part of why it succeeds. While the conceit seemed to be borrowing from Chopped‘s playbook–give talented people random, unexpected things and expect them to use them in a refined way–the mystery basket seems like the easy part compared to creating a brand-new routine with a partner they’ve never performed with before. That seems like a challenge, and forcing the magicians to work together has produced some astounding magic and entertaining performances.

The best performances lock in to the low-rent vibe and the magicians are casual but sophisticated with their magic, creating not just tricks but also stories. After two pairs of challengers compete, the winner faces off against two of the house magicians with a whole new set of things. That gives us the chance to see the best act try to one-up themselves–and their competitors, who have a clear house advantage.

The show is well-paced, and it’s mini-bracketed competition works well. I don’t find the behind-the-scenes workshop footage to be all that compelling, but otherwise the show uses its time well: Penn & Teller and the other magicians/judges perform brief and impressive acts in-between the big four performances, and there’s just enough time allotted to judging. Host Ellen Fox does exactly what she needs to.

Overall, it’s a fun hour, though there are things I’d change besides adding even more episodes. After the season ended, I saw the Wizard Wars pilot, which you can watch below, and it surprised me because a lot of what I wanted from the series is right there.

The show was born in an 11-minute pilot posted to YouTube two years ago; it’s extremely well-made for something shot in an apartment’s living room (an excellent model for those with dreams of turning their YouTube videos into television shows), and you can see how it got the attention of A. Smith and Co. Productions.The strength of the format is clear, since a considerable amount of it survived to the Syfy version. Its host and co-creator, Justin Flom, is now one of the house magicians–er, wizards–while the other co-creator, Rick Lax, performs in the pilot and is now an executive producer.

What they created works well, and I hope they bring back some of it–and add other things. Here’s what I’d change for season two: