Tonight is the return of ABC’s Shark Tank, which recently won a well-deserved Emmy and continues to be one of the best broadcast network reality shows. The show has been expanded to two hours for its premiere and thus will face off against another long-time Emmy-winner, The Amazing Race, which moves to Fridays at 8 p.m. tonight. 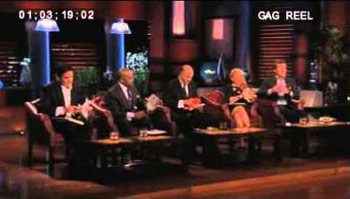 For a few hours Thursday, Kevin O’Leary posted a nearly eight-minute-long gag reel video that included footage of the sharks like we’ve never seen them before, from playfully goofing around while shooting the intro to exposing parts of themselves to each other, literally (while demoing a product, Barbara Corcoran spreads her legs and apparently exposes herself to Mark Cuban, saying he’ll be her next husband). There was also a lot of humor from the editing of the clips, such as the juxtaposition of Robert’s repeated use of the word “amazing” with reactions from the other shark.

Kevin’s description said, “After years of trying I was finally able to get snag a copy of one of Shark Tank’s top secret gag reels!” It identifies the clips as from season six, which is the season that debuts tonight. Sometime between last night and early this morning, the video became private and his tweet disappeared.

Hopefully, it’ll find its way back online soon. While the video below isn’t as funny, it is the first two minutes of tonight’s two-hour season premiere, which recaps what’s happened and previews the season and tonight’s episode. Looks like another strong season ahead in the tank.

In advance of the new season, I rated the six sharks for HitFix, evaluating their usefulness to both the show and to potential partners. Mark Cuban is on top for both measurements, of course.

Update, Friday, 12:45 p.m.: The gag reel is back online and is below. It’s a higher resolution version of the one that was online yesterday but doesn’t seem to be otherwise edited.