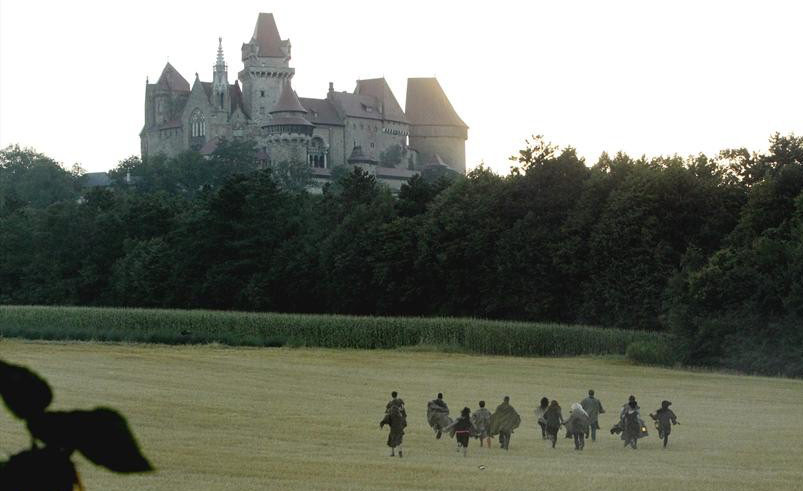 The Quest's Paladins on the first day of their adventure. (Photo by Rick Rowell/ABC)

Looking back at The Quest‘s two-hour conclusion and its 10 chapters, I’m not sure how much of the overall story works as a cohesive narrative. But I am sure that I was totally immersed in both the reality competition and the finale, which continually wowed me.

The Quest, like most season-one reality competitions, has room to grow, but by its end it was consistently demonstrating Survivor-level quality in terms of its storytelling, editing, and overall production.

In retrospect, the final few episodes ultimately seemed like having the Paladins running in circles in the woods until only one was left who could go back to the castle and destroy Verlox.

In the first hour, the introduction of the group of lizard things, the Rana tribe, set up a so-so challenge but otherwise seemed disconnected. It did allow for the long-time-in-coming reveal of the Vizier as a traitor, but that didn’t land for me because the paladins figured it out long ago and I didn’t quite understand why he was there.

Yet the capture of the paladins, the queen, and Sir Ansgar was absurdly tense—and when Lina shoved the others out of the way to confront the Rana chief, holy shit. Those are the kind of moments that showed how invested the contestants were. Combining reality with fiction really can succeed.

The finale was half challenge, half battle, and kept up the momentum. Throughout, the special effects were awesome, seriously better than what we see on many broadcast network dramas. I particularly liked the way the second and third place contestants vanished from the challenge and reappeared before the Fates, though the emotional charge of having the eliminated contestants reappear made that moment even better for me. The contestants did actually surprise Lina, too, though of course the effects were added in post-production.

Lina almost didn’t make it to the final three; after Shondo won the final Fates challenge, he and Andrew split their votes between Patrick and Lina. The tie-breaker was decided by giving the earlier immunity challenge winner an extra vote, basically, and Andrew chose Lina.

I’m not a fan of giving one player more power than others in a game, but is preferable to something completely random, and deciding a tie this way was always the producers’ plan.

The final three participated in my favorite kind of reality competition challenge, a multi-stage challenge that, like the other challenges, was produced by the same team that does The Amazing Race‘s challenges.

It did an excellent job of combining luck (finding the scroll in the first stage), intelligence (balancing objects, weaving the chain across the doors), physical ability (running from location to location), and skill (hitting a bullseye with an arrow). Lina’s intelligence helped her pull ahead, as she figured out the balancing; Andrew’s impulsiveness and panic caused him to screw up repeatedly.

For a competition in which I did not really care about the outcome—all of the final five, really, would have been satisfying winners—it was incredibly tense and dramatic, especially as Lina kept missing the bullseye as Andrew caught up.

The final few acts followed all the Paladins’ attack on the castle and Lina’s defeat of Verlox. That was scripted and choreographed, of course.

For a show without a cash prize—a creative decision by the producers, not a cheap decision by ABC—this was the prize, allowing its fantasy-loving contestants to be participants in the climax of the story. This was the only time in which the producers really asked the cast to act, and it was worth it.

Those scenes alternated between epic (seeing the army amassed outside the castle, a lot of the swordplay between the paladins and the soldiers inside) and cheesy (Lina’s battle with Verlox was edited a little chaotically and anticlimactically).

The Quest ultimately concluded with a cliffhanger, teasing the second season that it deserves.

If it doesn’t get one, however, The Quest leaves as its own kind of hero: a flawed and imperfect series that had a lot of battles to fight but whose producers graciously accepted the challenge and easily achieved victory by creating high-quality reality television that was beloved by those who knew it.