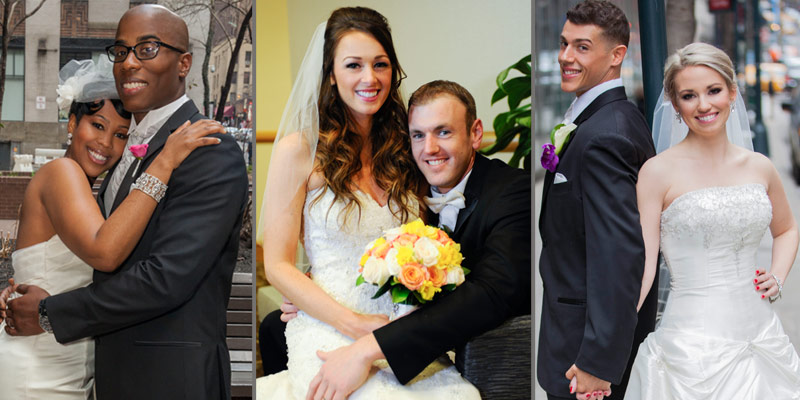 Married at First Sight was this summer’s sleeper reality hit. Debuting on a brand-new network and having what seemed like a ridiculous premise, it proved to be an exceptional series. I quickly fell in love with it.

Tonight, the season concludes as the couples decide whether or not to stay together, but FYI Network will extend the season by a week, airing a “lost footage” episode next week before a reunion of the cast.

Tangent: The couples’ recent discussion about the end of the “experiment” suggests that despite being legally married, they’re viewing it as a finite, reversible thing—perhaps illustrative of the way some people view marriage, but also undermining one of the things that made it so compelling initially, that they were locked into a relationship with a stranger. Nevertheless, the relationships and interaction remain fascinating.

I talked recently with the show’s executive producer, Chris Coelen, whose Kinetic Content also produces series such as The Taste, Little Women: LA, and Gym Rescue, about the challenges of casting the series and how it came together.

How the show ended up on FYI﻿

“Multiple networks make bids for it,” Coelen said, but while there were “far bigger–really, really big networks–which were interested and bid on the show, [FYI was] the only the network that said, ‘We so believe in this show, and so are committed to what it is you guys want to do with the show,'” which was film it “doc style; we didn’t want to throw a lot of contrivances in there.” Other networks proposed changes such as having one-off, self-contained episodes. Coelen said FYI was “the network that was the most passionate.”

As to the challenge of launching a series on a new network that was formerly a little-watched network, Coelen said, “I truly believe the audience is smart enough and savvy enough and the way that people find shows today is different enough, that if you make a show that you believe in, and you deliver compelling content to the audience, the audience ultimately will find it no matter where it is.”

The casting and vetting process took about six months and focused only on people in the New York City tri-state are. That was “to give the relationships the best shot of working,” Coelen said,” because “it would be unrealistic” to expect who lived far apart to go through this process. “How are they going to integrate their lives that makes any sense?”

As to vetting people, he said, “We tried to be thorough about everything. … It was a really intense process to go through, so everything was investigated and researched and gone through to the extent that we could make happen.” He added that producers “wouldn’t want to be irresponsible; we wouldn’t people who hadn’t gone through a psych evaluation on your show, you have some safeguards.”

Why producers withheld the twist during casting

“We pretty much told them everything except for the fact that they would meet their husband or wife at the altar and see them for the very first time there,” Coelen said. “We didn’t want to tell people what the show was about” because “we wanted to find people who were serious about wanting to be in a relationship, were serious about wanting to find love who had enough previous relationship experience that they had been through heartbreak, perhaps several times, but still had enough positivity about relationships and love that they really were ready to find it. We wanted it to work.”

He added, “We wanted to make sure people were brave and bold. They would probably get a lot of people telling them not to do it. We wanted people who felt confident enough and independent enough that they would choose to go through with it.”

What happened when producers revealed the twist

That process resulted in 100 people being brought to New York City for workshops. “It was one of the craziest things I’ve ever been through in my career, those workshops,” Coelen said. The 100 were separated into groups of 25 and also split by sex, so they wouldn’t encounter their potential partners. That’s when the twist was revealed.

Coelen said that withholding the twist also served another purpose: “We also didn’t want to scare away people who were genuinely in that place we wanted them to be: brave and looking for love.”

How many people quit when learning of the twist

Although the first episode showed a few people leaving during those casting workshops, producers told them they didn’t want an immediate answer, but instead let them have time to consider everything. Ultimately, “about half said they didn’t want to it,” Coelen said. “It was really scary as a producer; we didn’t know that we were going to get people who would agree to do the show. We thought we might come out of these workshops with nobody–with nobody agreeing to do it, let alone people we thought we could match.”

Finding matchable people was important “because what we wanted to accomplish with the show was real, was genuine, we wanted to be successful, that was the motivation to do the show,” he said.

Producers “spent about four hours in these workshops trying to really earn the trust.” The potential cast members were told, “We just threw the biggest curveball at you guys, and now we’re asking you to believe there are no more curveballs.”  He said they wouldn’t do anything like bring back the cast’s exes or make the participate in challenges, but instead, “we really want to follow your real journey in your real life. You make all the decisions; we don’t tell you to do anything.”

“We wanted to do that quickly because it’s real … if we waited six months to jump into production, things happen, they’re living their real lives, they’re out trying to find people to fall in love with. They said yes, so we wanted to move quickly and have the marriages happen as fast as we could possibly do it.”

How much participants were paid

Coelen described their compensation as “a nothing stipend. We did not want people who were motivated by the wrong things.”

The role of the experts/matchmakers

The participants had a “direct line of communication to them” if they wanted to reach out,” but Coelen said “the experts were smart enough [to say]: ‘I’m not coming in to be your chaperone. You need to have that time to get to know one another.'” The experts’ commentary isn’t based on what we’re seeing, but only the process of matchmaking them and any interacting they might have had during the process. “The experts never saw any of the footage,” Coelen said.

Shooting the series “was, frankly, incredibly difficult,” Coelen said. “We tried to be as unobtrusive as possible” and “not disrupt them, not make them do things.” As part of that, “we didn’t ask them to leave their jobs,” which made the filming schedule even more challenging. “Honestly, we tried to get them whenever we could. It was very, very tricky.” He called the series a “throwback, in some ways: it’s a documentary series.”