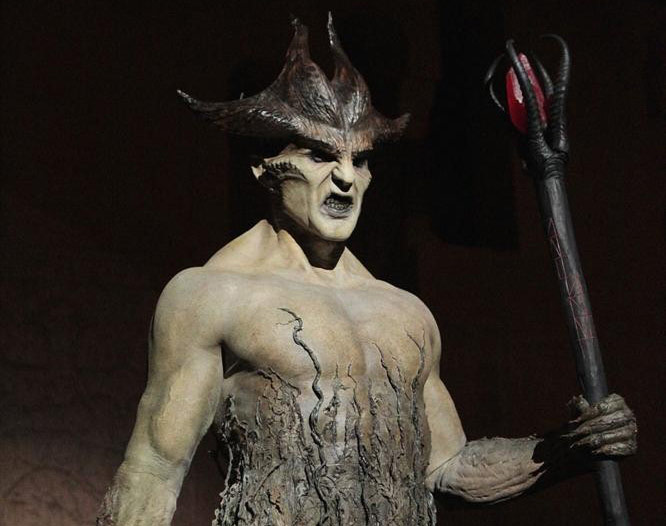 Douglas Tait is one of the stars of The Quest, and is heavily involved in tonight’s two-hour finale of the epic ABC reality series, but you will never see his face on screen. That’s because he’s an actor who plays three costumed, heavily made-up characters: Verlox, the villain; the ogre who battled Sir Ansgar; and a third character who will appear for the first time tonight.

Tait’s acting covers a wide range of roles, from Sons of Anarchy to Jason in the final scene of Freddy vs. Jason; he’s also bee bigfoot in a Hyundai commercial and a villain on NCIS Los Angeles. His most memorable and high-profile roles, including in the first new Star Trek film, have been “playing characters in makeup,” he told me.

The effects shop that worked on The Quest recommended him, and he was initially just hired to play Verlox; producers later added two additional roles, the ogre and a chief character that will appear tonight.

I asked him about what it was like to work as an actor on a hybrid reality competition, and also discussed his roles and the show itself. Echoing the hopes of other fans, Tait said, “I really hope that there is a season two; I think it’ll build more of a fan base.”

Acting on a reality series

Initially, he said, “I didn’t know how it was going to be accomplished” because “I’m a creature, they’re going to know that it’s not real.” He said he went into the project with “a lot of questions but at the same time, a lot of excitement. I knew they were going for top movie quality” instead of low-rent cable quality. That was important because “if it was cheesy makeup on me, the contestants, I don’t think they would have reacted the same.”

Some actors have been vocal about their hostility toward reality TV, which has sometimes taken timeslots and money away from scripted projects, but Tait said that it was “the best of both worlds on this show. … You see reality stars and they’re getting famous off being ridiculous on camera, … but not all reality is that. This definitely changed my mind, thinking it was going to be a show where people are against each other and making people look bad and causing fights. It has a lot more offer.”

Working on The Quest, where real people are interacting in a fully immersive fictional environment, is “not like a movie where they can say cut, get him out of this. There was no cut. You better be good because you only got one shot at this,” he said. “As an actor it really keeps you on your toes and engaged and listening. … It feels very real because it is.”

Tait said that the producers “were overwhelmed when I was there, so a lot of work I did was on my own and with the special effects people,” but the pre-planning they’d done was everything he needed. “The characters were so amazing that it gave me a lot to work with, and the script was there. … They had a whole syllabus on all the characters and the world that was created, and why Verlox used to be a good person and why he turned evil.”

Amazing Race producer Bertram van Munster, who acted as the director on set, “would encourage me: oh I really like this, I really like that,” Tait said. But there wasn’t time for detailed rehearsals. “I might have gotten a quick rehearsal, but other than that there wasn’t much time,” he told me. What they were able to do was “not really for performance as much as technical” things such as camera placement and lighting. That was okay because “seeing the character and being in it was the best practice for it.”

Tait confirmed that the production basically hid the fact that the castle was a set: “lights were hidden, all the cords and extension cords and things, they were all hidden under trees and branches. They really did a great job of keeping you immersed in that world.” (Learn more about the behind-the-scenes work that went into creating Everealm.)

The first appearance of Verlox last week was “the first time I got in the makeup,” Tait told me. “I can’t tell you how thrilling it was as an actor. Not only are you in a real castle, but you’re this power, this force, this evil that has been talked about in every single episode has built up to you.”

Thanks to the other actors, including an army fighting in real gear and the Paladins reacting to him for the first time, plus phenomenal, real-life special effects–the castle walls shatter when he touches a column, accomplished via the use of sophisticated projection technology, plus sound and lighting–“I felt so powerful; I lost myself in that character, I was lost, I was that character,” Tait said. “I’m even getting the chills talking about it right now.”

Those special effects were atypical for an actor. “That never happens, especially nowadays with everything being so CGI heavy,” he said. But on The Quest, “it has to be real-time, in the moment, because the Paladins have to see that or else you’re going to get a phony reaction or cut away to something else.” Tait said that the final edit “didn’t use everything,” including that, as he entered the castle, the “stairs start cracking. I couldn’t believe they didn’t use all that.”

It took about 4.5 hours to apply Verlox’s makeup.

Playing the ogre, who first appeared in the premiere (watch an extended cut) and later shows up at the castle to battle Sir Ansgar, was difficult because of both the costume (“you can’t see, there’s a lot of weight”) and the physical requirements of the role (Tait said he was “out in the woods for an over hour waiting for them, and I couldn’t have a fan”).

The effects team used an animatronic head for the ogre, which sat atop Tait’s head and was controlled off-camera. As a result, getting in the costume took far less time than Verlox: about an hour.

Interacting with the paladins

“I never had contact with a Paladin during it or even after,” Tait said, adding that when he returned from working in Austria, he’d sometimes receive Facebook messages from “somebody who would say, ‘Verlox, you’re the man,'” and he only later realized those were the paladins. “I was so separate from them and I was in my own world,” and “I didn’t want to know anything about them.”

Once, however, when he was out of makeup, he went to craft serves to eat and interacted briefly with two women. “They started talking to me, and I guess they knew who they was,” but he had no idea that they were eliminated contesants Ashley and Katie. “They looked at me like, ‘Are you kidding me? We’re the Paladins!’ I had no clue who they were.”