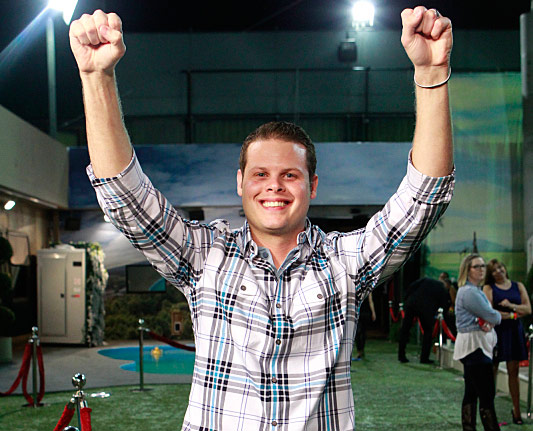 Derrick Levasseur in the Big Brother back yard after his win. (Photo by Sonja Flemming/CBS)

Big Brother 16 has its winner, and of course it was the person who’d won the game before it even started for most of the players: Derrick Levasseur. He may have been far more subtle than other master strategic players, but he’s quite deserving for the way he played the entire house all summer long. Next, he should go on Survivor.

He won with seven of the jury’s nine votes; only Jacosta and Donny voted against him. Donny received more than half of the votes for the $25,000 fan favorite prize, defeating Zach and Nicole–Frankie Grande’s millions of close social media friends weren’t even able to get him into the top three. Perhaps that can be the end of the conspiracy theories about Frankie?

Cody won the final, always-stupid, completely pointless, very nearly random final HOH competition (guess what the jury members said, and watch your educated guesses fail because they’ve answered stupid, subjective questions!) and took Derrick to the final two, preserving his alliance but also probably depriving himself of the $500,000 he might have won had he taken Victoria.

The final HOH competition was stupid, but it took place on a massive scale that shifted as their scores changed, a welcome change from the days when that competition took place in the living room with only a divider as set decoration. The final three HOH competitions all had strong set design, starting with a visually stunning hang glider-themed endurance challenge. Big Brother competitions have to work within the limitations of the back yard, but the challenge team proved this year that those limitations don’t prevent even familiar challenges from looking good.

The 90-minute finale also included pre-written questions from the jury, which didn’t reveal much except the perception that Cody was Derrick’s puppet, which he said “hit me a little bit in the heart.” Earlier, the jury talked about their possible vote, with Dr. Will moderating and feigning ignorance and/or admitting he hasn’t watched when he said “I don’t understand” why Derrick has been getting more credit than Cody for his game play.

Meanwhile, at some point between going to the jury house and the live finale, Frankie turned into a stop motion animation character, jerking around awkwardly when he voted and did other look-at-me things.

Thus ends Big Brother until it returns next season. Well, kind of: Show alumnus and inexplicable CBS darling Jeff Schroeder has earned additional employment, and will now host the CBS.com Survivor after show, because if there’s anyone you want asking detailed questions about complex strategy it’s a guy prone to anti-gay rants who says coherent things such as “I was speaking in a magical term; it wasn’t even reality.” Then again, he is “a big fan of John Rocker,” so I’m sure it’ll all work out.