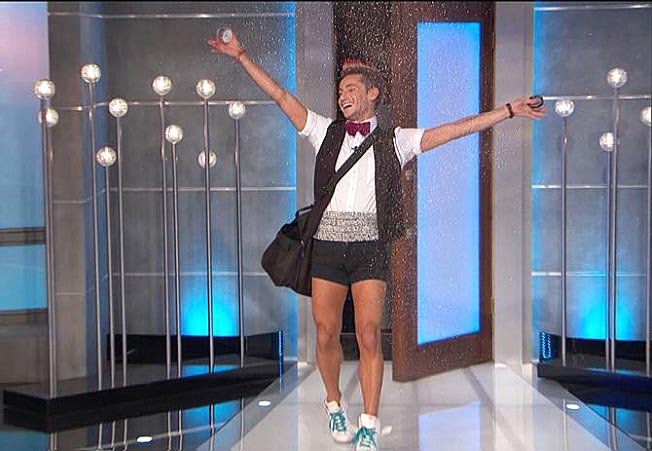 Frankie Grande exits the house after being evicted on Big Brother 16.

Big Brother is moving fast, burning through another week of episodes in a single evening, from nominations to a live eviction. But there was still time for filler in the form of a family visit (Caleb’s) and more footage of evicted houseguest Frankie Grande. Thank Ariana for that, because his delusion was on fire, and he served as the grand marshal for the parade of delusion that followed.

Things Frankie actually said and appears to believe
“By doing this to me, you have created the most powerful person in this game.”
“You are reconnecting me with my millions of followers.”
As part of the jury, he will “single-handedly pick the winner of this game.”

Thing Caleb said that we were all thinking
“Shut up, Frankie.”

Thing Caleb said that made us wonder what he was thinking
“I’ve never been good at webs.”

Caleb, after his alliance repeatedly betrayed and lied to people
“We’re here due to loyalty, respecting people, being honest with people.”

Cody, apparently convinced that he’s on a show that is technically proficient
“She’s messing with us now,” he said, giggling as the final four couldn’t hear a thing Julie Chen was saying.

Cody, apparently convinced that Derrick will take him to the final two
He told Caleb that evicting Caleb “is what’s going to give us the best opportunity to sit next to each other to make that promise come true that we did on day two.” The only thing he did on day two was fall into the carefully spun web of a master player, who’s now less than a week away from winning.