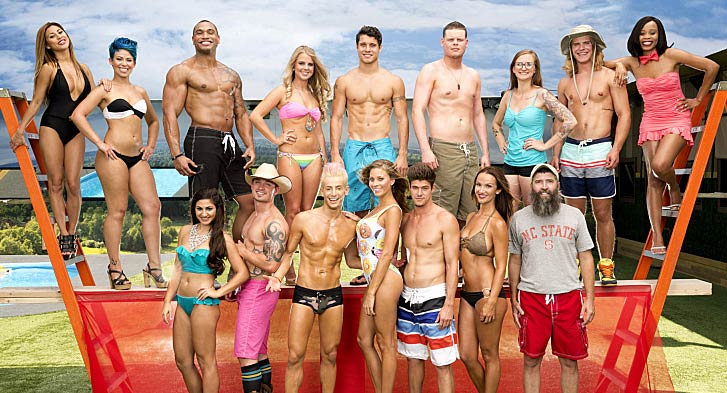 There have been many positive changes on Big Brother this summer, from sharper editing to a lack of ejaculating challenges, but the best change was the casting of thoroughly entertaining people.

It may require getting over blind hatred of Frankie Grande, but it’s time to admit it: Big Brother 16 had the CBS show’s best cast in years, and one of its best ever.

First, yes, the cast’s biggest–and not at all insignificant–weakness was its willingness to allow the season to be dominated by a single alliance. Usually Big Brother‘s strategic game plays out in such a way that it’s nearly impossible to map out what’s happened if you’ve missed an hour of activity on the live feeds; this season resembled a straight line, a leisurely drive down an interstate with a few quick lane changes but otherwise a steady, consistent drive forward.

There were a few feeble attempts–the cast threw competitions to try to manipulate the season’s biggest twist, and there were several back-door exits–but for the most part, this cast was unwilling to grab the steering wheel and turn it sharply. That’s not insignificant, and it led to a lot of boredom and predictability in terms of the game play. The producers, to their credit, mostly let things play out, except for that reset button, of course.

But for what this cast didn’t provide in terms of batshit crazy week-to-week drama, it also gave us an incredible master class in how to play the game and how to play other people from Derrick, who will probably win tonight and deserves every penny that CBS will pile on top of his $500,000. He’s such a fascinating strategic player that I’d love to see him play Survivor next.

Derrick’s dominance and the lack of major strategic upheaval doesn’t change the fact that the cast was still entertaining. Something about Big Brother‘s structure often leaves us with the more unlikable people at the end, but not this season.

The 16 houseguests were–by far–more complex and interesting than the last year’s disastrous cast. Despite some ugliness–slut-shaming Christine, stalking Amber, the use of some derogatory terms–by comparison to last year’s cast of bigotry-spewing twits, they’ve been total angels. (Not that that excuses anything they did say or do, of course.)

Mostly, they were fun, even when they weren’t perfectly behaved or playing perfect games. We started with delusional Devin, and along the way grew to love demure Donny; there was the tornado that was insane but lovable Zach and his complicatedly fascinating relationship with Frankie, and the insane self absorption of Victoria. Let’s not forget “Beast Mode” Caleb and hilariously nerdy Nicole. Even the quieter houseguests–Amber, Paola, Joey, Donny–left entertaining wake behind them.

Yes, Frankie was a terrific character with a highly entertaining season-long arc. He went from presumed favorite to severe underdog (that amazing veto competition!) to delusional joke. Frankie crawled so far up his own back door that he seriously called himself “the most powerful person in this game” as he was being evicted, insisting he’d be reunited “with [his] millions of followers.” If you can’t see how completely beneficial it was to have Frankie around, however frustrating and aggravating he may have frequently been, you may have been blinded by his glitter.

Though they let themselves be played, this cast was certainly worth watching each week, and that’s more than most Big Brother casts can say.