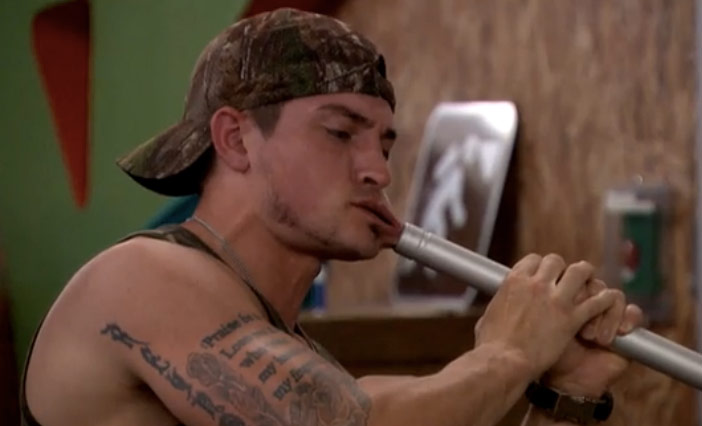 Big Brother 16's Caleb finally gets some action in the house.

A quipcap of Sunday’s Big Brother 16, on which the jury returned to nearly literally crap all over the houseguests’ parade and Frankie battled to keep things exactly like they were last week, when things were boring.

Cody says what we’re all thinking
“I don’t want to see a literal rewind of last week.”

How awesome it was that the houseguests had to watch the luxury competition
Very awesome. Probably the producers’  best creative decision of the season.

How awesome it was that the jury trashed the house–repeatedly
Mostly awesome but also horrifying because I was imagining having to clean that up, and not just because I wouldn’t have just insisted it was the woman’s job to clean things up like Cody did with the trash in the kitchen (“Victoria, all you girl”).

How transparently this was about making something happen
As clear as invisible glass.

Length of the Viagra ad I had to sit through as part of CBS.com’s insufferably long ad breaks because the DVRed version was cut off thanks to football overrun
45 seconds

Most unexpected face sucking
The vacuum on Caleb’s face.

Unfortunately, he didn’t mean what many of us hoped he meant
When Cody said: “Right now’s when I really need to pull it out.”