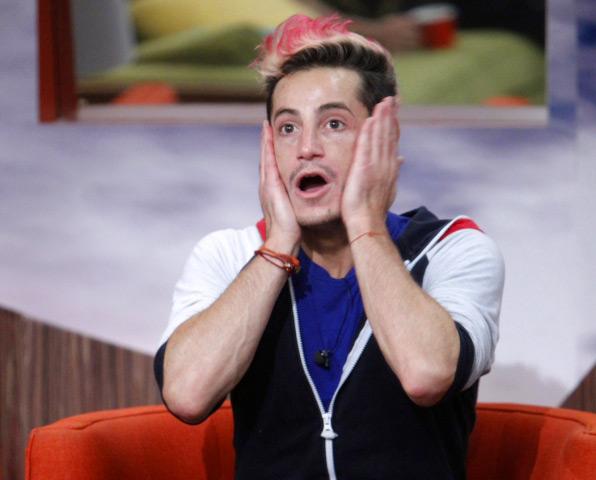 A pre-taped “live” Big Brother eviction gives Julie Chen the opportunity to pretend like we don’t all know what’s about to happen, and gives the still-dominant alliance a chance to evict Frankie Grande while a fake audience cheers. But first, the houseguests have to all replay the mashed-up faces veto competition. A quipcap of Tuesday night’s episode.

“He’s done. It’s game over.”
Caleb summarizing Frankie’s game after Frankie failed to get as quick a time as Cody did in the veto competition.

“You should use the veto on me. Thank you very much. Crushed it.”
Surprisingly not the most delusional thing Frankie has said all summer. Also, the only thing he crushed this episode were his pre-planned goodbyes to his fellow houseguests when he said, “Victoria, please win something.”

Amount Frankie shook and vibrated in anger and frustration this episode
8.5, about the same as an iPhone connected to a car battery.

“Thank you to all my fans and supporters; without you, I am nothing.”
Don’t be so hard on yourself, Frankie. Don’t believe that invitation-only studio audience’s fake cheers: You are something, even without any fans.

“I can’t not win things.”
Frankie has already forgotten that he lost Big Brother.

“Anything can happen, and anyone can be evicted tonight.”
Yes, the producers are still having Julie Chen ignore reality and try to pretend that the eviction will be a surprise instead of a foregone conclusion, as they’ve been all season long.

“The Big Brother rewind has changed everything.”
OMG that one was actually true.

“Team America is over.”
Just like it was before it even started.

$50,000
Amount of the bonus producers will give Derrick for his Team America “service” if he wins, which means he’ll get $550,000 for winning next Wednesday.

Best edit of the episode
Victoria studying a package of bread while the guys studied the memory wall.