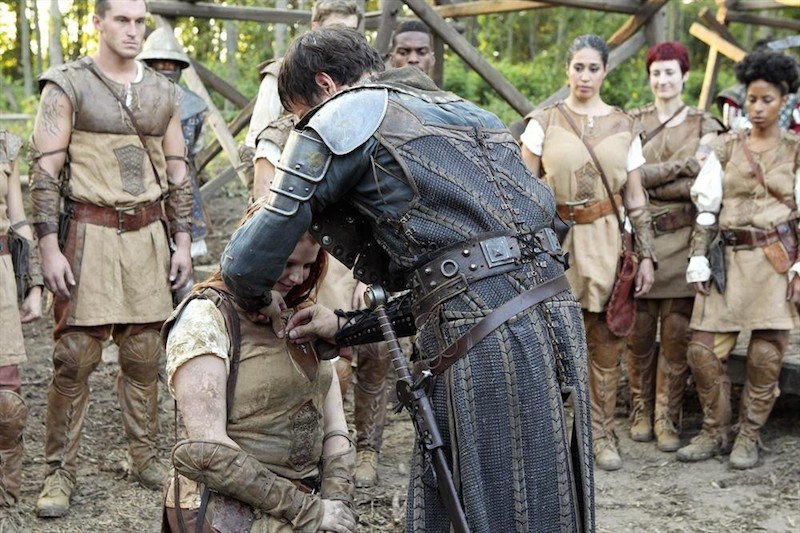 The Quest debuted last night with its introduction of a fictional story and a real-life competition. While the production values were incredibly strong, the episode had a lot of hurdles to overcome, such as introducing the cast of fictional people and contestants, never mind explaining just exactly what the game is.

ABC should be thrilled: its strategy of burying and not promoting the show paid off, earning an audience of just 2.8 million people and a 0.7 rating in 18-49, about 46 percent fewer adults than watched Whodunnit‘s premiere last summer, though that show debuted a lot earlier in the summer. It was also less-popular than ABC’s great documentary series, NY Med, which followed it two hours later.

In short, it did not do well–though without any advertising at all, it earned two-tenths of a rating point less than Rising Star did on Sunday. You’ll recall that’s the reality competition ABC decided to throw its weight behind this summer, because it was new and innovative and not at all derivative. But I digress.

The good news is the entire series has been filmed, so I doubt ABC will pull it, and The Quest gets exponentially better over the next few episodes. Considering there was positive reaction online and from critics (not just me), I have hope that it will grow Shark Tank-style. Recall that ABC just kicked that show around its schedule its first season and basically left it to die on Fridays, where it has since increased its ratings every year and now the network loves it. And of course, overnight ratings are no longer the full story, with DVR usage after the first night factored in weeks later. Ratings also currently don’t include those who will watch online.

During the first episode, I was intrigued but not totally sold, in part because there’s a lot going on, and there’s a degree of unfamiliarity, never mind the required suspension of disbelief. The trek through the woods worked to establish the story and pull the contestants into the world; they seemed truly terrified by the creature, and for a second it seemed like Shondo was going to go after it. However, there wasn’t much development of the Paladins as characters beyond brief introductions.

The first challenge helped to explain a significant part of the game play–it’s essentially an immunity challenge after which the losers will have a second chance at immunity before being considered for elimination–but it wasn’t a strong challenge. I did love Ansgar’s angry reaction to their terrible performance  (totally improvised, by the way, and nice contrast to the Fate on the right who can’t sell her lines at all).

Probably the highlight in episode one for me was The Quest‘s exceptional production design, from the spectacular location (that castle!) to its Tribal Council was an impressive set. Having eliminated contestants be literally vaporized was a well-done touch. I’m also intrigued by the kind of game the contestants will play when it comes to eliminations. Will they really keep the strong, most worthy people around? Or vote out those who will be competition?

As I wrote in my full review of the series, episode three is when everything really came together for me, from Mole-like challenges to the balance of fiction and reality, so if it didn’t work for you, stick with it for a couple more episodes.