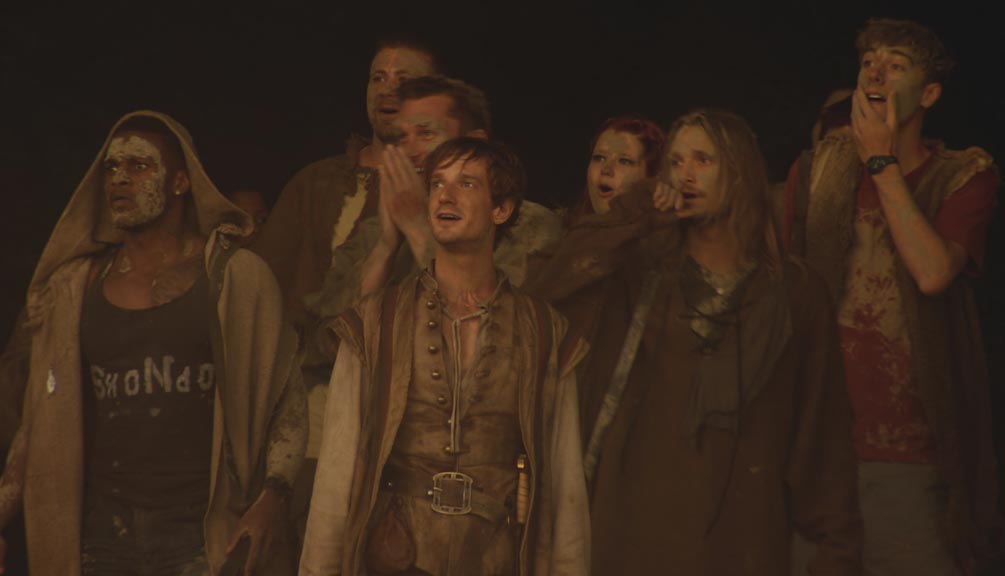 A few weeks ago, I talked with four of The Quest’s producers—Jane Fleming, Mark Ordesky, Rob Eric, and Elise Doganieri—to learn more about its production, which occurred last summer in Austria. Here are highlights from that conversation.

Where it was filmed

Kreuzenstein Castle is a privately owned castle in Austria, north of Vienna, which previously served as a filming location for Nicolas Cage’s Season of the Witch.

The production considered 1,500 different castles; some were just facades, while others had roads or businesses adjacent to them. This location worked in part because it was surrounded by 70 acres of woods.

Because there was no electricity or running water, nor any other structures on the property, Doganieri said “we had this container village” built nearby for production; it had air conditioning, electricity, catering, and everything else the producers needed.

Contestants wore microphones every day, but those were attached by people in costume because producers and other crew wore costumes to blend in with the extras in the castle and elsewhere.Thus, the only truly visible crew members were camera operators, who wore black.

Producers didn’t speak to the contestants, and when there was a need to tell the cast something, that was done in character as part of the story (for example, a soldier might explain how to perform a challenge).

The contestants were constantly kept in the world of the story, and while they were guided by the actors, they weren’t coached to behave in any way (Doganieri said, “There was no prodding [by producers], ‘Why don’t you talk about this?'”), so everything that occurs is organic.

Why there’s no prize

“We debated it; I was a fan of a prize because I’m a crass commercialist,” Fleming joked. But because the story and its conclusion occurs in a fictional universe, “We really couldn’t figure out what the prize was: Do you give them a bucket of gold? Do you give them a car? It was so weird.” Rob Eric said the experience was enough for the contestants–and for those who applied for season two at FantasyCon recently. “You spend your entire life wanting to live a fairy tale, you spend your whole life wanting to be a hero and to rise above … that’s what they cared about,” he said. “It was prize enough.”

The first eight minutes of the first episode was an entire night in the woods for the cast, who arrived at the castle at sunrise. “They got chased by things, we were all hiding,” Fleming said. “There’s a second visit from the ogre, they have to hide, they had a real night.”

Attention to detail and special effects

Jane Fleming said the production designer they used is “a genius” and “knew how to make the challenges look right.” She also said the production had the advantage of “Queer Eye for the Castle Guy” because Rob Eric, who previously produced the Bravo series, “checked every costume before it got to set,” and also paid attention to details such as actors’ fingernails.

Nearly all of the special effects are practical, and Eric said that’s to keep the cast in the world. “If we’re going to do this, magic has to happen in front of them, because we don’t want to pull back and do what you do in a typical movie, where we would put green screen–we wanted it to happen real,” he said.

Casting and rehearsing with the actors

It took months to cast the actors, in part because they were casting in Europe and needed people who not only spoke English, but also “had to be very good at improv,” Doganieri said, because of the possibility of unexpected interaction or questions. (Some who came in for casting had resumes that said they were fluent in English but then couldn’t speak the language at all.)

Producers “wrote story bibles for each of the characters,” Fleming told me, so the actors knew their characters’ backstory and arcs.

They did rehearsals for about a week before the contestants arrived, but mostly rehearsed upcoming scenes between competitions using stand-ins to try to predict how the contestants would react, not unlike Survivor‘s use of the Dream Team.

How Sir Ansgar was chosen

“He was the hardest role to cast,” Rob Eric said, since he plays a central role. While Eric found Peter Windhofer immediately, the process of going back and forth with the network took time, and after casting in places from Germany to London, they ended up hiring him the day before on location pre-production started. “He was meant to be Ansgar.”

Overall, Doganieri said the actors loved the combination of scripted storytelling and improvisation: “Sometimes actors are not sure about reality television; these actors loved this.”

The length of production

The entire series was shot in 25 days, slightly longer than The Amazing Race and slightly shorter than a season of Survivor. Fleming said it was filmed “a lot like an indie feature.” The producers whose background was in film were amazed at how quickly the production moved through the script.

What they learned from other hybrid reality shows

Producers wanted to “create an environment where could transform,” Ordesky said. “You’re basically taking real people … and they’re operating on a stage that isn’t real life.” Eric added, “We learned that you needed to make the world real, and you needed texture. You can’t just throw a bandana on somebody and say you’re a pirate.”

From other shows, Fleming said they realized “we never wanted to put our Paladins in a position to pretend that somebody died or to pretend that something would happen. The competition grounds the whole thing,” she said. “To talk about the context of saving a kingdom is very different than to pretend somebody died. We were very careful in all of our storytelling, and actually threw down a few times with each other … whatever’s happening in front of them has to be plausible within this world.”

“What we didn’t want was these contestants acting, because that would have been a disaster,” Fleming said.

How six executive producers worked together

“You would think, six EPs, we would all hate each other. We love each other,” Rob Eric said, and the other producers agreed. That was not “Hollywood bullshit,” he added, “we actually worked incredibly well together, and every single one of us has brought our A-game to this show, and I think it shows. We literally just worked our ass off.” Jane Fleming added, “We ended up, all six, dealing with every single aspect” of the production.

The genesis of the idea

The show began as Fleming and Ordesky, a producer of Lord of the Rings, watched footage of “Orlando Bloom doing archery” during training, and “it looked like so much fun.”

They were later pitched what they called “a lame idea” but that prompted them to come up with the idea for the series. Because “we know what we don’t know,” Fleming said, they went to Eric and his producing partner, and later—about four years ago—brought Elise Doganieri and Betram van Munster on board.

Doganieri said the show “had a little bit of the feeling of Race where it was something that we knew it was almost impossible to do, but we love that challenge.” The story was created from scratch.

Producers have ideas for season two, and created the first season with the possibility of future seasons in mind. “We wanted to have a world that was scalable,” Fleming said. “We wanted to start in one kingdom. We have 12 kingdoms, so we have at least 12 seasons.” In addition, they expressed hope that this format could be used in other genres, such as sci-fi, or even with existing brands. (That made me think of something like Star Trek: The Reality Series.)

How the producers felt about the first season

My review of The Quest is here, and I asked producers how they felt about end result.

The producing team is thrilled with the 10 hours of television they crafted. “Intention meeting reality, that doesn’t happen all the time,” Ordesky said. Fleming said, “We believe that viewers are craving quality and something good-natured.”