Why I fell in love with Married at First Sight

FYI’s Married at First Sight reminds me of last summer’s Discovery Channel series Naked And Afraid: its title and premise is provocative and even shocking. Beyond the headline-grabbing premise, though, the series has turned out to be a stripped-down, authentic exploration of something very interesting.

Here, the subject is relationships, which of course is extremely well-worn territory in reality television. However, instead of taking The Bachelor route and using relationships as an excuse to generate drama that is amusing but rarely revealing, Married at First Sight pushes into what it takes to make a relationship work, frequently challenging our expectations.

My relationship with Married at First Sight was pretty much like Jamie’s relationship with Doug: Her expectations weren’t immediately met, especially aesthetic ones, and she crumbled under the premise. But rather quickly, she found out that there was a rather interesting and even incredible person there, one with a lot of depth and surprises.

I was largely uninterested in the experts and matchmaking of the first episode, which simultaneously felt like too much filler and not enough about the actual process of matching the people who’d applied. In episode two, the actual weddings and receptions in hotel conference rooms felt cheap and overly gendered, mostly following a well-worn path that American couples are expected to follow (though having a female officiant was a nice counterpoint to traditional gender roles).

When the couples actually met, after their weddings, and started getting real, the series became instantly compelling. It grabbed me about the time the revelation seemed to hit Jamie that she was about to marry someone she wasn’t attracted to, as she later admitted to friends while sobbing in the hallway. The awkward tension between them was can’t-look-away horrifying.

That kind of tension was quickly replaced, however, with what’s basically an sociological examination of relationships, except the academics’ and experts thoughts and analysis are the least-interesting parts. While the structure of the series is a little forced, following the stages of a relationship and making me wonder how much of that was organic and how much was encouraged or pushed by the producers, nearly every act has a moment or more that manages to surprise. The individuals learn things about themselves and their partners; the couples grow and change. 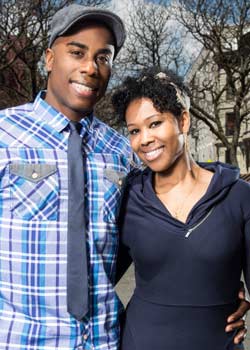 Halfway through the series (all episodes are online), we’ve already seen significant change in all the couples. For example, there’s some hesitation in Cortney and Jason’s relationship, which appeared the most successful from the beginning. But that, like all first impressions, was superficial.

Monet and Vaughn started with intense physical connection and chemistry but quickly started bickering, communicating their needs and wants by wrapping them around verbal rocks and hurling them at each other–and that was before Vaughn suggested a three-way. They basically separated less than two weeks into their marriage.

What’s really interesting is the way the series presents the ups and downs of these relationships without seeming exploitative or intrusive, even though there seem to be cameras constantly present. They are navigating the intersection of the mundane parts of life and the critical parts of a relationship under the scrutiny of cameras and viewers.

The cast handles all this really well, and were well-selected: they can articulate their feelings to the cameras and to each other, but never feel like they’re performing. While Jamie was on both The Bachelor and Bachelor Pad, and one might reasonably expect she’s here just seeking fame, on this show she does not seem like a typical contestant from either of her previous reality TV appearances. I think that may say more about how each show is produced and the seriousness of their premises than it does about her; ultimately, ABC’s series only seems interested using its contestants and the idea of love as pieces in a machine that will produce ratings.

In an era of Tinder and Grindr, instant acceptance or dismissal of a potential partner, or instant sex with another body, Married at First Sight offers the thrill of watching strangers deal with the very basics of relationships, from mundane things such as finances to more complex things such as finding time to spend with each other. Like marriage, there’s a lot more to it than its title.