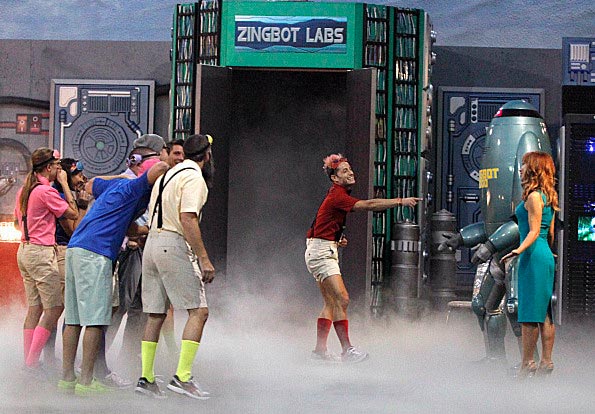 Zingbot and Kathy Griffin after the Power of Veto competition on Big Brother. (Photo by Sonja Flemming/CBS)

Ziiiinng! How I loved hearing those words again. Big Brother‘s twist on the Zingbot, which was broken and only capable of issuing “props,” was clever, as was its integration with yet another strong challenge.  The houseguests game play, however, was the opposite of creative, and continues along the path of making the game play increasingly uninteresting.

First, as much as I love the Zingbot, I did cringe more than once at some of its lines. Frankie’s zing was just about perfect, taking a fact something everyone knows and ripping him for it: “Frankie, that’s a nice tan. But I’m surprised you get any sun at all considering how much time you spend in your sister’s shadow.”

But calling Derrick ugly was just pointlessly mean. Worse, Kathy Griffin called out Victoria (“I’m only supposed to zing people that are actually playing the game”) and the Zingbot called out Donny (“your social game is like Suck Dynasty”) for their game play, which is probably obvious to the other houseguests but crosses a line for me that I wish it hadn’t crossed. Compare this year’s zings to the Zingbot’s first appearance four seasons ago and you’ll see how different it was back then; there were no jokes that could affect someone’s game.

Kathy Griffin’s entrance felt pretty forced, but it was worth it for her zings–“zing, motherfucker, zing”–and even just for the look on the houseguests’ faces as they waited for someone or some thing to come through the front door.

The episode covered some of Sunday evening’s chaotic events, as the house discovered that their things were missing. Frankie’s “stealth ninja” mode consisted of running through the house shirtless, wearing just tiny pink shorts but carrying Cody’s massive cowboy boots. Compare that to Derrick, who concealed items in his baggy sweatpants and covered the bulge with his sweatshirt. Their approach seemed like good metaphors for their games.

What happened once missing things were discovered was classic Big Brother–and human nature. People started identifying Zach as a saboteur, even the actual saboteurs, and it was literally impossible for Zach to defend himself against the witch-hunting party’s paranoia. “You’re caught. Do you think we’re stupid?” Caleb asked. I wonder how stupid he’ll feel when he learns that Zach had absolutely nothing to do with it.

The worst part was watching Frankie pile on Zach, and not just the way he took advantage of Caleb and others’ hostility toward Zach to use that as an excuse to back-door Zach. Instead, it’s the way Frankie loudly blamed Zach after Zach whispered to Frankie that he wasn’t responsible. It’s one thing to turn on a friend and/or alliance member in the game; ultimately, that nearly always has to happen. But it’s entirely another thing to be cruel to a friend and blame them for something you did. That takes a special kind of awful.

Zach may think Frankie has this fan-favorite locked up, but I don’t think that’s true at all; the edit may not be giving us full-frontal Frankie, but it is also not presenting him in the best light. Watching Frankie bound across the back yard after his veto win to hug Kathy Griffin and tell her “I did that for you” was so gross I’m surprised she didn’t barf on him.

As to Derrick: Everyone knows he’s going to win this game, yet no one wants to do anything about it. Zach told Frankie that Derrick would win at the end, and Frankie agreed that Derrick would beat anyone, “even me.” (Yes, of course you’re the presumed frontrunner, Frankie, ugh.) Donny knows Derrick is “blowing smoke up everyone’s tail” but his strategy is to sigh heavily and fall back into bed.

The producers will again try to shake things up tonight by bringing back a juror, so Zach could come right back in, which would be especially fun if he became HOH and turned on Frankie and Derrick. That may be hoping for too much, though.