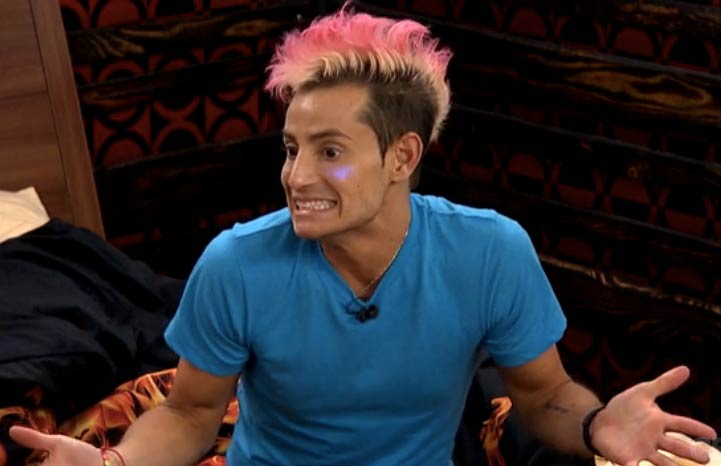 Frankie Grande comes out as famous on Big Brother 16.

Frankie Grande never said, Don’t you know who I am? to his fellow Big Brother 16 players, but he might as well have, because his announcement/confession landed about as well as Bravo reality star demanding special treatment at a Denny’s.

“I’ve been lying to you the entire game,” Frankie said to Zach, Caleb, Cody, and Derrick, over-enunciating every syllable so his fellow dumb-dumbs could understand. “Since I walked into this house, I am not who I said I was. … I’m a YouTuber and a TV personality and a social media mogul. I walked into this house with 1.5 million followers.”

Frankie delivered this information with a tone one might use to explain to a child that the child’s goldfish has died, assuming you wanted to make the child cry even harder by insisting you were superior because you knew the fish was dead and the kid did not.

But he wasn’t done waving his condescending flag yet: “My sister is a mega, mega pop star. What is my last name?” he demanded.

Derrick knew immediately who Frankie’s sister was: “Amanda Grande.” You couldn’t script a better moment than that: Frankie finally tells his closest friends how adjacent to fame he is and impresses none of them. Actually, only Victoria–of course!–seemed to recognize Ariana Grande, and the editing mocked her for it, because this is the first time she’s seemed interested in anything.

In defense of Victoria, she later challenged Frankie’s reasons for his confession, and you know if Victoria says you’re full of b.s., you’re basically hanging from a cow’s anus.

The scene was so rich, including the perfect moment of secretly-a-cop Derrick’s surprise leading him to say, “Because honestly, most of us are who we say we are.” And there was Caleb, who said in all seriousness, “Are you even gay?”

While Frankie’s delivery sucked, the strategy had some tiny hint of sense because he tied his secret in with paranoia in order to justify his behavior and lying: “I’ve been playing this game really paranoid, and I started to lose it. I’m apologizing. This is an apology.” Their confusion was understandable, because the words “I’m sorry for being a liar” sounded more like “mega, mega pop star,” “social media mogul,” and “I’m so much better than you.”

As if that wasn’t enough obnoxiousness, he threw in something about playing for charity, which is the first I’d heard of that. He actually apparently meant a real charity, not himself, because he’ll be “using the money that I get from this show to build schools in Africa.”

I can’t imagine how he thought saying that would benefit him; perhaps he thought he needed an escape goat. Instead, he infuriated Zach, much in the way he’s infuriated some feed watchers.

Zach was so enraged he was crying in the Diary Room, yelling at the network and producers–and it seemed directed at them, not at Frankie–about how unfair it is to compete against Frankie: “This guy already won fan favorite. He’s donating the money to kids fucking kids in Africa. Why the fuck isn’t he not going to win? Give him the money. I’m wasting my fucking time right now.”

His anger is understandable. Big Brother has a long history of unfair casting twists that sometimes handicap certain players but also give absurdly unfair advantages to other players. It’s almost as if CBS is afraid to let the game play out organically, as it did in its early seasons.

Season 16 actually represents an exception: there are no pre-existing couples and no returnees with have the distinct advantage of knowing the game, the house, the production, and everything else that stresses new players. Casting a YouTube famewhore with a quasi-famous sister makes the playing field for certain parts of the game uneven, but it is also one of the least unfair casting twists the show has had, and is roughly equivalent to casting Rachel Reilly’s sister last year.

Yes, his fame probably got him selected for Team America: Failure Patrol, which has failed 50 percent of its tasks so far and thus earned him an extra $10,000, though Donny and Derrick also earned the same thing. Frankie may have fan favorite locked up if Ariana directs her minions to vote for him, but if he gets voted out soon, someone else could emerge as the star of the TV show and win that vote easily, as we’ve seen before.

Most significantly, the jury still decides the winner of the $500,000, and Frankie’s reveal may have ensured he’ll never win their vote.

Meanwhile, after an appearance by Gilbert Gottfried as veto challenge narrator Otev the Pissed-Off Penguin, during which he called the houseguests stupid and “morons” more than once, the game basically settled back into its rut.

Zach won the veto and the alliance threatened Christine, basically, and so she broke her promise and back-doored Nicole, who will probably leave tonight. (She’s the first dethroned HOH to be subsequently nominated.) And as tends to happen in a claustrophobic house with no one else to talk to, relationships seemed to be repaired rapidly, with Zach telling Frankie he was mad at him as a player but still loved him as a person.

I suspect the same is true for viewers, if not live feed watchers: Frankie may be infuriatingly obnoxious, but he’s now produced incredibly entertaining television for two episodes in a row. As that Amanda Grande says, “even though I hate ya, I wanna love ya.”