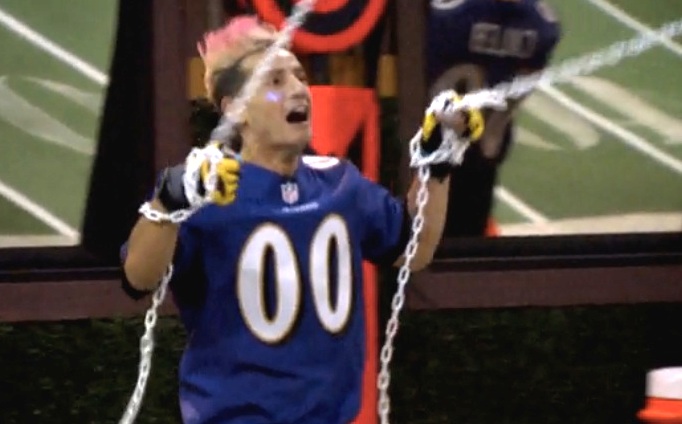 Big Brother 16's Frankie wins the Battle of the Block

Big Brother proved why it’s a strategic competition worth watching last night. While the events of Thursday’s Big Brother were not that dramatic, the aftermath was precisely the opposite–and exactly what this season needed. In the past, I’ve explained why I’ve stuck with the show, and this episode illustrated what the show can be at its best. The preceding, often tedious six weeks laid the groundwork for drama, adding layers to the strategy and emotion.

With two competitions, nominations, and a ridiculous amount of scrambling, it was an action-packed 44 minutes that offered increasingly amazing moments.

First, as Nicole’s anger over Hayden’s eviction led her to expose Frankie’s unnamed alliance, his face cycled through several emotions while struggling to stay static. He’d been caught, and everyone seemed to know it, even Zach. Frankie later made a desperate, private plea to Nicole by way of an overly dramatic confession: “I’m just going to do this, and I’m just going to say it. <DRAMATIC BREATH> I was working with the other side of the house.”

Meanwhile, Zach stomped around the house and gave Frankie the silent treatment while Derrick and the other remaining members of the alliance devised a plan to save themselves by dumping Frankie, using Nicole as HOH and Caleb as a nominee pawn. I see why Nicole would go along with that, because she didn’t seem to have any other ideas, but save for a possible alliance with Zach (!), I can’t see her decisions this week doing anything for her long game. She’s back to pawn/target next week.

Then came the Battle of the Block competition. Holy shit.

Caleb’s decision to throw it–and his inability to conceal that from Frankie–led to epic reality television, and that was before the challenge even started. “Amber’s gone because of you,” Caleb said, calling back to his crazy obsession and connecting that to his current lack of trust for Frankie. “So play chains by yourself,” he said, sitting down on the sidelines. “It’s what happens when break trust and loyalty. This right here. I’m sorry, Frank, but you done this to yourself.”

That led to an exceptionally tense few minutes during which Frankie played both sides of a two-person challenge that doubled as an advertisement for CBS’ Thursday Night Football. I supposed one could argue that it was easier for Frankie, since he didn’t have to rely on someone else and could control the board by himself, but he was far behind for most of the challenge, and the editing suggested Zach and Donny’s communication and patience broke down the closer they got to winning. Frankie’s win was so surprising, so unexpected, he basically broke down.

As a fan of reality television, you couldn’t have asked for a better outcome than what that challenge delivered from pre-start to finish.

Even better, Frankie’s win and its aftermath–particularly Frankie’s announcement and the late-in-the-day timing of the challenge–fired up crazy conspiracy theories among some feed watchers. I’m the first to call bullshit on this or other reality shows, but there is nothing in the theories I’ve read that makes any sense. (Feed-watching conspiracy theorists: I care about you, so please go outside and get some fresh air. You’ve been spending too much time staring at a screen full of people locked in a soundstage.)

Still, bring it on: This season can use more crazy.

Frankie deciding to tell everyone that Ariana is is half-sister (“tell the house my big secret, who I’m related to: the one, the only Ariana Grande,” he said in the most annoying way possible) is about the least-surprising thing that’s ever happened on Big Brother. And turning it into a big look-at-me production is the least-surprising thing Frankie has done, and it makes perfect sense to plan to do that after a competition, when he was on a challenge-win high or when he possibly would have been on a challenge-loss low and in need of something to win people over.

If anything, I hope his announcement keeps the distrust alive so that the alliance is forced to splinter even more in the coming weeks, rather than just regrouping and proceeding as normal (though that seems likely). Either way, I’m grateful for what the last few days produced.