Big Brother‘s format is far more controlled than Survivor‘s, and it’s generally served the show well for the past 15 seasons, delivering power shifts that keep the drama ramped up.

But its weakness has become apparent this season, because a large alliance has dominated and prevented any power shifts.

By all indications, the production is doing everything right: There’s a strong cast of relatively complicated people (well, for the most part, coughVictoriacough), and there’s stronger editing and production design (the comic book covers for Wednesday’s veto competition were particularly strong, designed by artists fromMarvel, DC, and Red Anvil).

Amid the recycled challenges have been some really strong new challenges, and the introduction of the two Heads of Household and the Battle of the Block competition added a layer that’s potentially interesting.

Yet after a really crazy start, this season became pretty predictable and boring. The two HOH twist comes across like a speed bump on the way to the normal trajectory. The Team America attempts to create drama haven’t worked.

Even the usually dramatic fast-forward episode of Big Brother last night failed to deliver any drama at all, save for Donny’s challenge win, and only because it seemed to nearly knock him unconscious. Jacosta and Hayden were evicted, and despite talk of turning on certain people (Zach, Frankie), most players seem to recognize that it’s in their best interest to maintain the status quo. Ultimately, they’ll be forced to turn on each other, but by then, will anyone care?

As a result of all this, season 16 has even been called the worst season ever, though I’d take a boring season over an insanely bigoted one any day.

It may suddenly shift; that’s the power of the format and the fun of reality TV competitions, where the players choose how to play.

But week after week of nothing new has left me thinking about whether the format is too limiting because of the way it narrows choices. Having a HOH nominate two people creates targets but also, as we’ve seen this season, can minimize drama or action.

Compare it to the format on Survivor, where nearly anyone can go home every three days; on Big Brother, post-veto, nearly everyone is safe for more than half a week. Meanwhile, players can be sent home without a chance to save themselves, which can occasionally be dramatic but rarely functions as a blindside.

A few weeks ago, the week after Devin’s eviction when things first slowed down, I asked Big Brother‘s producers, Allison Grodner and Rich Meehan, if they’d ever consider shaking up the game even more dramatically than they did this year, such as getting rid of the veto. 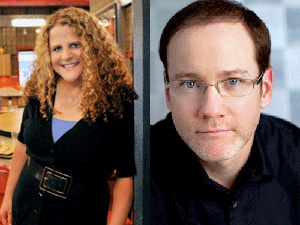 Grodner said “we’re always looking for ways to refresh the show,” and citing “new changes to the ceremonies,” the lack of black-and-white flashbacks “at the top of the show,” and the two HOHs,  she said, “it doesn’t have to stay stagnant.”

Referring to the two HOH twist, Meehan said, “We always try to keep the core engine of the show, the format there, and look for ways to twist it up or tweak it or alter it, and this year we went with just a larger version.”

He added, “hopefully, the longer the twist goes, some of the most interesting facets of how it could work will play out. Maybe the HOHs will not always be working together, and they could get evicted.  Hopefully the longer it goes, and the more people’s relationships change, we can have some different things play out.”

Unfortunately, we haven’t seen that yet. I asked about getting rid of the veto or otherwise altering the core game.

“What probably would never change, and–I don’t know, maybe you’ll disagree with me,” Grodner said to Meehan, “but I think it’s the head of household and the power shift that happens that’s crucial to this game. With that, I think the next thing in line, the veto was such a big deal when we put in play; it really changed things. It’s hard to get rid of it completely. That doesn’t mean there’s [not] room for it to evolve—certainly, now we have this two head-of-household Battle of the Block. But to get rid of it completely, I would say no.”

Meehan agreed. “If it went away, it would need to be replaced by something else, because we really want something in that episode that is a story-driver, that leads to a dramatic ending, that we can watch something play out over the course of the episode,” he said. “That is that format piece for that episode. Live show we have eviction and HOH, and Sunday we have noms. So every episode has kind of a big piece that’s driving the story, so I don’t think we’d make it disappear. Maybe something could replace it at some point.

Grodner said, “Yeah, you never know. Certainly, we made some changes this year, so it could happen.”

When I pointed out that the week post-Devin was relatively boring, she said that “gives us time to play other stories. To have characters emerge who haven’t really had the spotlight because we had these big, powerful players come in, like Devin, and take over the first three weeks. I think if you look back at any of these seasons, you’ll see that there’s those landslide votes, they happen. Everyone’s a little scared, they’re feeling everyone out, it’s like, go with the house.”

“This is the week coming up that things start to break apart a bit, and hopefully that does happen,” Grodner said.

Hopefully, it will, but that was three weeks ago.