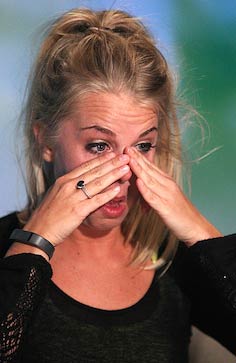 Big Brother took the path of least resistance during its most recent live show: eliminating Nicole in a 6-0 vote and returning power to the alliance after a relatively suspense-less HOH challenge that was mostly a competition between alliance members.

Despite severe missteps–that final interview that I didn’t even watch because no, the Thursday Night Football ad masquerading as a prize–there were fun moments.

Primarily: The random yet perfect inclusion of Cody slapping himself in the face while sleeping and then looking around to see who slapped him; a mannequin in a grave that was vibrating and, because he was partially concealed by an on-screen graphic, looked to be pleasuring himself; and the behind-the-mirrored-glass zombies, an even more effective use of that trick that’s apparently been used before but that I forgot about since I purge my brain of every season after the season concludes.