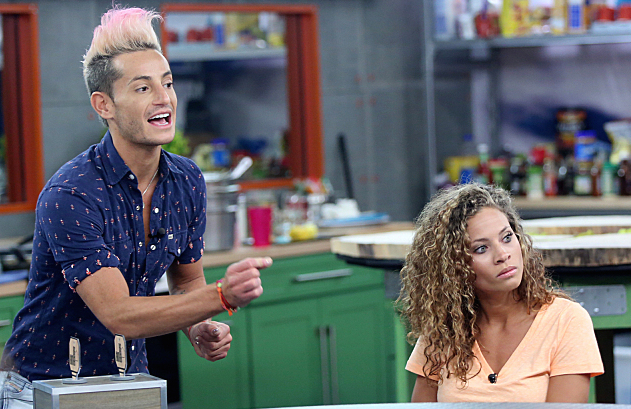 Frankie and Amber on Big Brother 16. (Photo by Monty Brinton/CBS)

This summer’s Big Brother is fascinatingly weird. I can’t quite figure out what’s going on: It’s alternately insanely dramatic and boring, with some real wild cards who are playing with the new format, but also playing a very predictable game so far. The two HOH twist has introduced strategy for nominating people and pairs of people, but that tends to evaporate quickly and leave the game like it has always been.

The producers attempted to stir things up with a Team America: World Police challenge last night to vote against the house. As transparent an attempt as that was, I liked it because I always want someone to vote against the house just to make everyone else paranoid and crazy. The three men refused the task, and it was a nice touch for Derrick to blame their non-participation on Donny, which is kind of like saying, “That guy refuses to set himself on fire, so I guess I can’t, either.”

Overall, what we’ve had so far this season is a dominant alliance that has shifted slightly but mostly stayed focused: using a pool of non-players (Victoria, Jocasta, Donny) as pawns and then targeting/back-dooring perceived but rarely actual threats. Not one vote has been a surprise; post-veto, the house seems to lock in on a target and and shrug its shoulders.

The cast is, on the whole, far more likable and interesting than any recent cast, though there is the usual amount of stupidity and delusion. Frankie’s game play would best be described as sociopathic: He’s able to able to convince others to find a knife, hold it up while he thrusts it into their back, and then be there to comfort them in their pain after generously volunteering to help them get the knife out. The others seem to love him for it, too. Zach is an entertaining nitwit, until he decides to be cruel to someone, and on the televised version, that is directed toward women.

Which brings me to this: This cast hasn’t, to my knowledge, been spewing hate speech all season long, but what’s unfolded over the past five weeks is starting to feel somewhat sexist. Four of the five houseguests to be evicted so far have been women; three of those four were evicted unanimously. But so was Devin, and this information on its own is not at all damning.

A pattern that emerged with Amber’s eviction this week is that the houseguests/alliance seems to lock in every week on a woman who’s not only objectified, but then scapegoated and vilified (usually for things they are also doing), and then back-doored and/or evicted. This alliance of mostly men has continually identified women as their major threats, with Devin being a notable exception.

Back in the early part of the season, when the bros formed their first alliance, and when Joey clumsily tried to create her own all-female alliance, the reaction, especially from Caleb and Devin, was to tell her how stupid she was—for doing exactly what they did. They punished her by evicting her.

Now, delusional, hypocritical behavior is nothing new for the game, and eliminating someone who tries to make a move early isn’t surprising. But what followed Joey’s eviction was basically a repetition of that same pattern. The obvious threats are being ignored, perhaps just because they’re part of the alliance who’s making decisions.

Things turned particularly ugly this week because the vote was fueled by Caleb’s unrequited crush on Amber, which fueled his anger toward her.  Others used that to their advantage, perhaps smartly, but it was still gross, encouraging Caleb to punish and scare Amber by nominating her so they could vote her out. As Amber told Julie Chen, who still seems to think the crush is an amusing wannabe showmance, “I think it really did affect my game, and him doing all that–ugh.” Immediately after Amber was evicted, Caleb said, “That’s what happens when you bite the hand that feeds you,” which is a good illustration of his perception that he was somehow in charge of her and she was just ungrateful.

I’m hopeful that this pattern will conclude with last night’s eviction, and that with the results of last night’s HOH, the alliance is knocked out of its comfortable pedestal and its members forced to scramble.