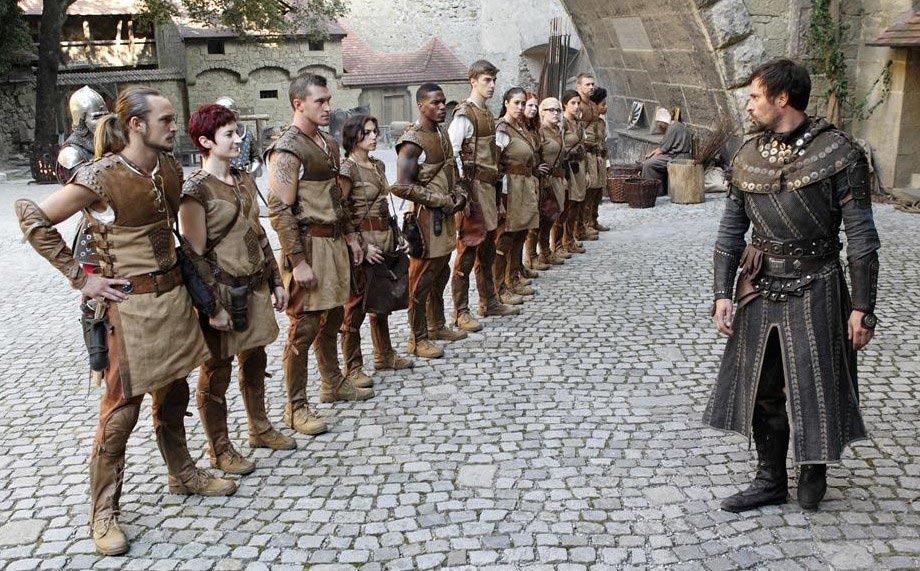 The Paladins and Sir Ansgar in The Quest. (Photo by Rick Rowell/ABC)

Hybrid reality TV shows that combine unscripted interaction and fair competition inside a fictional context have significant hurdles to overcome. They must create a compelling story that can seamlessly contain reality elements that are authentic and not overly produced. From Murder in Small Town X to Pirate Master to Whodunnit, many shows have tried.

At long last, a show has succeeded in finding the right balance: ABC’s The Quest, which debuts tonight at 8 p.m. ET.

By episode three, The Quest proves it has mastered—and helped to further define—this reality television sub-genre, with each episode exponentially improving its mix of a well-c0nstructed world and reality competition. Its contestants have entered a fictional world, Everealm, where prophecy says that one of 12 people will be able to help save it. That sets up a nice context for a competition, yet it is not just a context in the way that Survivor’s remote locations host a game.

While The Quest is most certainly a game, there is no prize. While the contestants, known as Paladins, compete for both immunity and elimination, they do so in challenges that the are almost always organically integrated with the story.

While the Paladins are definitely not acting nor being coached, they allow themselves to be fully immersed in the world—and buy in to what’s happening so much that at times I was frequently afraid that one person, Shondo, was going to punch an actor he feared was a true threat.

That immersion is made possibly by outstanding production design, including everything from the epic location (a real castle in Austria) to the background extras to the orchestration. Nearly all the impressive special effects are practical effects, occurring in real life for the contestants just as we see them on screen. That adds realism and heightens the experience for both them and us.

The Quest has three pairs of executive producers: The Amazing Race‘s Bertram van Munster and Elise Doganieri; former New Line Cinema executives Jane Fleming and Mark Ordesky, who worked on Lord of the Rings among other films; and Queer Eye‘s Rob Eric and Michael Williams. (Tomorrow, look for my Q&A with them.) Two of The Blair Witch Project’s creators assisted with the mythology and story.

Their sensibilities all mesh perfectly here, which is a remarkable achievement by itself. There’s The Amazing Race’s early challenges and cinematic immersion in a foreign land; the epic scope and believable fantasy of Lord of the Rings; and Queer Eye‘s unfiltered interaction of strong personalities.

The producers are, of course, backed by a crew that has done strong and mostly invisible work throughout. The show ends up feeling like a film, not a typical glossy ABC reality series.

The actors sell the fictional universe, though there are some weak spots, such as the comically awkward actor who plays one of the three Fates. However, Peter Windhofer, who plays Sir Ansgar, is truly exceptional; people have won Emmys for less-convincing performances. That is superlative, but his performance is so committed that I frequently forget he’s an actor playing a role, in the same way that I often forget the clones in Orphan Black are all played by the incredible Tatiana Maslany. Windhofer and others advance the story, narrate to viewers, and improvise with the contestants, sometimes simultaneously.

Although Whodunnit was airing last summer while The Quest was filming, some of its best parts can be found here. To begin, there is a certain suspension of disbelief required on the part of viewers and contestants, though less of one than is required by a murder mystery by a motive-less killer. Frequently dramatic cliffhangers conclude each episode, and besides challenges and eliminations, the only visible conceit borrowed from other reality competitions is inserts from sit-down interviews.

ABC is preceding each episode with a brief, 25-second behind-the-scenes clip that essentially serves as a disclaimer—no surprise considering that, last summer, people thought Whodunnit was actually killing its contestants.

I understand why a hybrid show with no host may need some explanation, yet that segment doesn’t seem obvious enough to explain what this is to those people who need to be told contestants didn’t really die last summer. The disclaimer ended up pulling me out of the narrative, reminding me that there were cameras and actors, when I wanted to give myself in to the idea that this was a real place in which these actual real people are doing actually real things.

Watching Survivor for the first time was an experience that inspired awe, its high quality and rich storytelling creating a new world that drew from familiar elements. That’s how The Quest feels, and it builds in a similar way, with the context and contestants continually offering epic surprises.