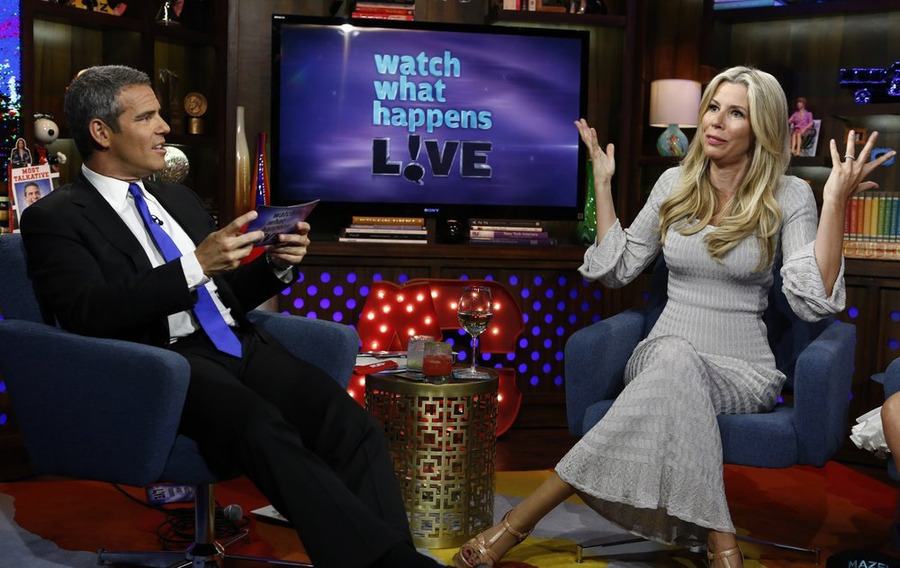 During a fight on Tuesday’s Real Housewives of New York City finale set at chic New York restaurant Le Cirque, cast member Aviva Drescher said, “The only thing that is artificial or fake about me, is this,” and produced her leg from under the table with the same effortlessness and casualness as one might pull out a receipt from Chipotle from one’s pocket.

Yes, she actually tried to prove that she was authentic by delivering a line worthy of Duck Dynasty.

Aviva later told Extra, “Some people throw down their glasses in anger … and I just had this knee-jerk reaction to take my leg and bang it on the table to hopefully shut up these shrews who were coming after me.”

However, let’s believe Aviva when she insists, “I didn’t plan it. It was not a premeditated leg-throw.”

Let’s also remember five years ago when Teresa flipped a table on The Real Housewives of New Jersey? And then a year later when the show had to one-up itself with a hair-pulling assault.

Cast members for Bravo’s brand-defining franchise who get re-hired year after year know what makes the show works: moments of unexpected drama. If they come from genuine emotion, even better.

But a season doesn’t work if the cameras show up and nothing happens. So things happen, and fade, and more things have to happen to keep people interested, like a heavily Botoxed fireworks display. Viewers just have to keep oohing and ahhing at the explosions.

The problem is that these moments have become like fights on The Real World: so expected they lose any sense of surprise. (That it was endlessly teased by Bravo did not help the moment feel new or spontaneous.)

We also know by now that, with a few exceptions, the casts interact only for the cameras.

Even if the leg throw wasn’t pre-meditated, the confrontation was, because pre-meditated moments is all the series is any more. Forgive the idiom in the title, but it’s true; there’s just nothing here any more, no weight or any sense of consequence.

After the leg-throw, Andy Cohen and three non-Aviva cast members sat around on Watch What Happens Live and discussed and analyzed the incident, if you can consider their discussion analysis.