The set of Esquire Network’s Knife Fight was chaotic: people moving everywhere, chefs moving around in the small open kitchen, conversation plus cooking so loud you cannot hear the chefs or the judges. Once the setting for late-night cook-offs, Top Chef 2 winner Ilan Hall’s downtown Los Angeles restaurant now also hosts a TV show that is essentially a televised version of those informal competitions.

On screen (and perhaps off), Knife Fight is essentially a stripped-down, raw version of Chopped, Food Network’s glossier and more structured competition. This show shares its crisp aesthetic with other Esquire shows, and focuses only on two chefs preparing dishes.

No prize, no repetition of stakes and biographical details to make sure we understand why this competition matters, no thin attempts to find parity in critique to create the possibility that anyone could go home. It’s just mystery ingredients turned into very different dishes by talented cooks.

Even the ingredients aren’t really an obstacle. “The challenge is really the hour. We try to get the best ingredients possible: things that are in season, things that are as local as possible,” Ilan Hall told me. “I want this to be a wet dream for chefs. I want them to walk in and be like, ‘Holy shit, that’s amazing, I can’t believe you got this, I can’t believe you got that.’ I think for the most part, we’re achieving that.”

Aside from set-up shots with the chefs coming in the room and being cheered, which were filmed several times, the hour unfolded as it does on television, though it is condensed to less than 22 minutes.

The chefs work while interacting with each other and the crowd: answering questions, trading barbs, and, eventually, rapidly explaining to the judges what they’ve prepared before the squeeze through the crowd and squeeze into the kitchen to keep cooking.

On set with Knife Fight, in a downtown L.A. restaurant

During a January taping, TV critics were invited to walk freely in front of the camera and even interact with the chefs while they cooked, which was so atypical for a set visit it felt wrong. Camera operators deftly navigated the spaces (a tiny kitchen and small dining room) and people (the chefs and the spectators, who were drinking and sometime standing on the large communal table the judges use, at least until it was wiped off by a crew member before food is placed on it).

Producers would occasionally pull a judge or spectator aside for an on-the-fly interview, but besides the cameras, the only real suggestion that there was a TV show being filmed was in the adjacent space.

The Gorbals is located off the lobby of the Hotel Alexandria, and thick cables fed monitors in an adjacent ballroom, the Palm Court, a place where U.S. presidents spoke and actors hung out under a Tiffany glass skylight. During production, it was home to folding tables and chairs and the crew’s equipment. 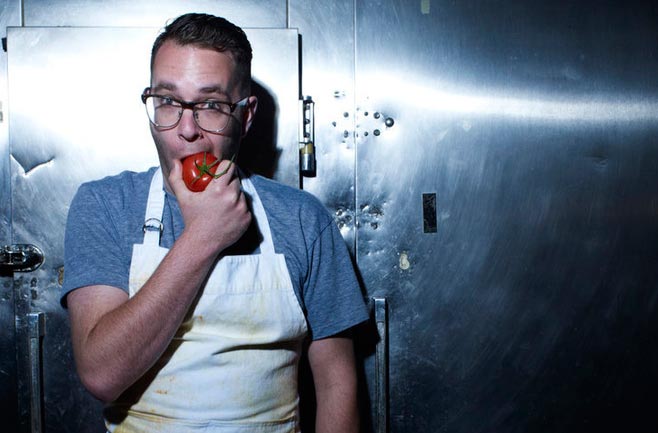 When I talked to Ilan earlier this summer, he was cooking—grilling a rabbit leg, charring cipollini onions, and spreading creme fraiche on sliced tofu he’d charred in chorizo fat—and he referred to the show as if it was something that just kind of comes and goes, like a plane flying overhead.

When I asked him about he balances the show, his restaurants, and his cooking, he even sounded annoyed, reminding me that the show had finished production and “I cook in a restaurant. That’s my job. Knife Fight is fun.”

Knife Fight emerged from real-life competitions in the same space, and became “a show that we would make,” Ilan said, “and that stems from it not being a show at all.”

Of course, it is a show, and all shows require production, even one filmed as loosely and fly-on-the-wall as this one. During a set visit, I heard several of the spectators refer to themselves as “background,” Hollywood-speak for being an extra who’s in the background of the scene.

When I asked him about that, Ilan said, “I don’t really know much about it. I don’t know. I can’t answer that.”

There was a simple explanation, as an Esquire Network spokesperson told me:

“It was tough this year to get people to the tapings in the morning because of the timing. This season we expanded our chef coverage and had many chefs from out of town. Therefore, we were unable to host their friends, family and local fan base in the audience. In order to ensure we had a packed house and consistent crowd we invited an audience company to help.”

Other things changed for the show’s second season, which resumes Tuesday night, bringing in chefs from around the country instead of just southern California. Like the selection of quality ingredients, Ilan said casting is just “me just picking people that I think are awesome.”

As to the ingredients, during the first season he just bought them before filming began (“I literally would just go shopping every day” which “kind of made production crazy,” Ilan said), he “wrote a master list.”

In the future, Ilan would like “old-school” chefs such as Wolfgang Puck. “I’d love to see Mario Batali; it’d be my dream to see him doing it because he’s so good,” Ilan said. His dream participant is Bobby Flay: “I’d love to see Bobby Flay but the only person I’d want him to go against is me,” he said. I asked him if he’d ever compete on his on show: “Only if it’s against Bobby Flay.”

Later, he said, “I want someone to reach out to him and really make it happen. I don’t know if he’ll be allowed to because he’s locked into a Food Network megadeal, but I would really love for him to be on the show. I would really love to beat Bobby Flay.”

Ilan’s experience on another network and food competition “really accelerated everything,” he said. “Top Chef threw me into a position of freedom. … I really was able to figure out what I wanted to do. … I wasn’t ready to open up a restaurant right when Top Chef ended. If I was, that would have been great, because I would have had so much immediate press. But I was in a different place; not mature enough to run a business and run a kitchen. So I took some time to figure out what I was going to do.”

As to the proliferation of food competitions that Top Chef spawned, Ilan said, “A lot of chefs have their issues with the fact that people think they know what they’re talking about, but I think any education is great for all of us. … It brings people attention to what they’re eating.”