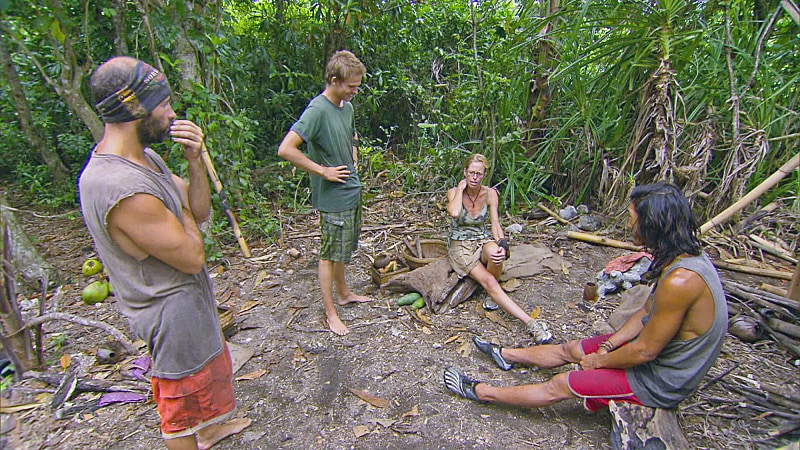 “I’m here to drag people’s dreams through the mud so I can fulfill mine,” Tony Vlachos said during Survivor Cagayan this season. During the finale, he said the “dirty stuff,” including “bluffing and lying my ass off,” was worth it, and it was. He received a near-unanimous vote from a jury that managed to see through its bitter tears that he played extremely well and made this season one of Survivor‘s best.

He was the right winner after a generally unsatisfying finale of ups and downs; the final two hours didn’t reach the level of game play or unpredictability that we had all season long. To me, Tony’s victory over Woo seemed guaranteed the second Woo won immunity, though the jury’s bitter Q&A made that a less clear outcome.

While Tony was occasionally annoying, and sometimes made logically or morally questionable decisions, his wild unpredictability and smart strategic moves kept the show interesting–and kept him in control. His major foil was Spencer, who saw, much in the way we did, that Tony was marching to an inevitable victory. A Tony-Spencer final two may have had the same outcome, but would have at least brought the second half of the season to a more gratifying climax.

Though the final two (and three) may have been unsatisfying, the jury Q&A was a good reminder that the stronger players really did outlast the chaff. For example, there was “I’m not bitter” Jefra who was, of course, super bitter, and Morgan, whose question time was used to talk about what “a young and attractive woman” she is (don’t forget humble). Jeremiah was upset that Tony’s game play didn’t align with his geographic origins (“where I’m from … that’s absolutely pathetic and pitiful”), and LJ was all like “I respect how you played me. Wait, you played me! I respect that. No, you played me!”

Yet they still all voted for Tony, perhaps because they couldn’t bring themselves to vote for Woo after Spencer’s speech, which, in grand Spencer tradition, perfectly laid out. Spencer was the post-merge Jiminy Cricket, constantly pointing out exactly what should happen but generally powerless to do anything about it.

Woo previously acknowledged that he’d be the “stupidest Survivor player taking Tony to the end,” but that’s exactly what he did after beating Kass by about a half a second in the epic final immunity challenge, couching his decision in honor and other things. Woo is charming and funny–his riff on what happens if there was a tie was great (“We fight for it?!”)–but never was a player in Tony, Spencer, or Kass’ leagues. He argued that he was an “inconspicuous” and “instrumental part” of all of Tony’s big moves, but that’s like saying a cup holder is an instrumental part of a car.

Kass pulled out an incredible immunity challenge win, coming from such a severe deficit that it was almost impossible to believe. She is a puzzle master, though she attributed the win to the presence of her husband. Yes, family members finally showed up, which was largely fun because of Spencer’s sister (to Probst: “of course he’s right”) and because of the evil eye Trish threw repeatedly upon learning that she’d just missed out on that.

After Kass’ win, Spencer was, of course, in trouble, and he made made an essentially flawless argument to Tony that there would be a final two, and both Kass and Woo would take each other to the final two. Unbelievably, Kass confirmed that his argument was 100 percent correct.

Yet Tony still voted Spencer out. Considering Woo’s eventual decision to take Tony to the end, and the jury’s decision, it was the right call. But damn, that was another insane risk by Tony that unbelievably paid off.

The final immunity challenge was truly spectacular, both in terms of the build and how it played out. Kass once again began a challenge by moving slowly, and then with lightening speed, finished the puzzle. Had she just moved faster for literally one second, she would have won. But that loss meant, as she said, “the person who hasn’t made a decision the entire game is in charge of my fate!” And that fate was to join the jury after a really good run.

Earlier, she told her husband that she was getting shit from other players because she’s female and making aggressive moves instead of just being passive and motherly, and I don’t doubt that’s true. And perhaps that explains my own reaction to her game play during the second half of the season, which frequently came across as questionable and reactionary, since I earlier praised Tony for reactionary.

While I grudgingly admit that it grew on me over the two hours, I didn’t really like the live cut-ins, and not just because Probst’s eyes were frightening me. There was just something jarring about interrupting the narrative by transitioning from beautifully composed shots to the live studio with its screaming audience.

Let us not talk any more about the Tyler Perry idol or Tyler Perry’s appearance during the reunion. Nor shall we discuss how Probst thinks the real problem with the idol was not its insane power, the fact that the other players didn’t know what its power actually was, nor that it was in no way Tyler Perry’s idea even though Probst tried to hedge and suggest that Tyler Perry added a twist that actually changed nothing. Sigh.

But the never-played idol won’t be what this season will be remembered for. Instead, it was one that continued Survivor‘s streak of incredibly strong seasons, never mind how it helped convince Probst and the producers that new players can work, which is why they’re apparently about to do two more seasons of all-new cast members.