If Survivor Cagayan’s brains tribe only had a brain, that would have been far less entertaining

By the time Jeff Probst was calling the second Survivor Cagayan episode’s Tribal Council “nuts” and “crazy,” and calling the group “the oddest tribe I’ve ever seen,” he was, for once, not being insanely superlative and force-feeding us a narrative. Their WTF are you thinking behavior was baffling and thoroughly, wonderfully entertaining.

Working backwards, there was the exit of cocky poker player Garrett, who spent his interviews sprawled out like he was practicing for an eventual Playgirl photo shoot, and who actually said, “I don’t want to play survivor to survive in the wilderness.” Despite having been voted the weakest by someone who deemed him a threat, and despite having found a hidden immunity idol, and despite his tribemate J’Tia having dumped the rice out (sigh) after having single-handedly lost the challenge for them, he was still voted out.

After J’Tai’s immature and completely pointless behavior, I thought there was no way they’d keep her, but I guess they found Garrett and his insufferable open meetings to be more of a problem than someone who may be adopting her strategy from the DVDs of a previous season casting made her watch.

In the first Tribal, it was Marlins president David who left the game first, opening up all kinds of comparisons between their game play and his, which sucked, never mind how entirely annoying he was.

Both of them, along with J’Tia, made classic early-game errors, standing out in a bad way. J’Tia declared that she had “an idea for a shelter,” but I’m not exactly clear on what skills a nuclear engineer brings to the shelter-making table, unless they planned on using radioactivity as one of their materials.

There are some players on the brains tribe who are playing with some smarts: Both Kass and Tasha are honest and direct, both to us and others, in a way that’s interesting and not self-defeating. I don’t yet understand Spencer. Along with J’Tia and the two men who were voted out, that’s the entire tribe. I’m a fan of having three tribes at the start, in part because it makes the game play more like later episodes when there are fewer people. It’s not easy to hide.

The conceit of dividing the tribes by traits that Probst insisted they “rely on” in their daily lives (please) proved to be essentially pointless, except to 1) provide easier tribe names (I don’t even bother to learn the actual tribe names any more) and 2) give recappers the opportunity to write punny headlines. Kass even called out the producers when she referenced how the brains tribe was assembled: “I’d like to see that data.”

All of the forced decision-making/attempts to create drama in the first few minutes of the game–pick a leader! choose the weakest! the weakest gets a reward! and a choice!–paid off only in Garrett finding the idol and being voted out while in possession of that idol.

At the first challenge, a clever obstacle course that involved a lot of different parts, including disassembling and reassembling a cart, the brains tribe fell behind, and at one point, a chest with puzzle pieces spilled open, twice. Probst screamed, “Another disaster! Puzzle pieces all over the place.” Oh no! What will we do! The puzzle pieces are on the ground! Life is over!

But even though Probst was being a jerk/creating narrative, he was absolutely right when he said, “Whatever brains they had clearly evaporated 72 hours into this game.”

Most of the episode focused on the brains tribe, but I will say this after watching the scene when his boat capsized: I want Cliff Robinson’s laugh to win this game. 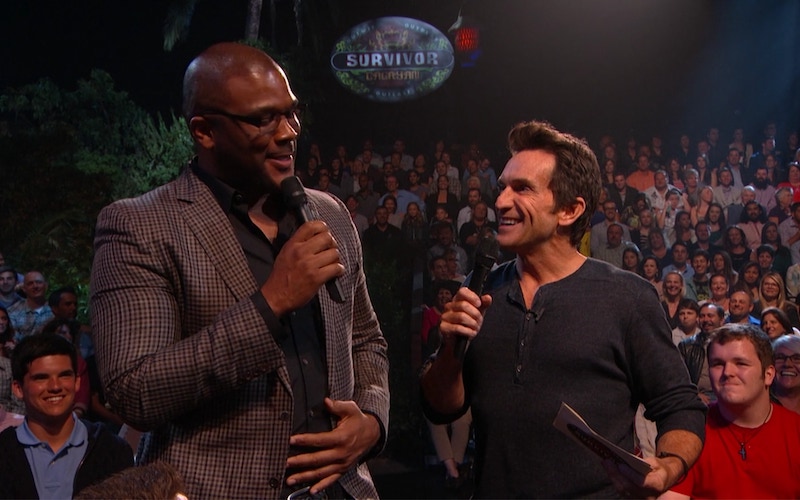 Previous
Survivor Cagayan idol with 'massive power' came from Tyler Perry—and seasons 12, 13
Next
How to watch the Oscar-nominated docs at home
Click here to cancel reply.