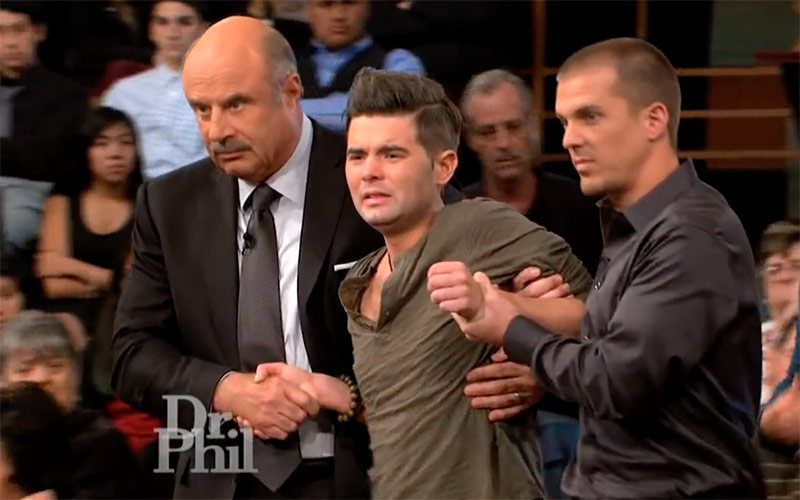 Survivor China winner Todd Herzog being helped to the stage by Dr. Phil in 2013.

Survivor China winner Todd Herzog is battling alcoholism, and incredibly disturbing footage from his appearance on Dr. Phil’s talk show later this month shows just how much he’s suffering from it.

“Today, I had an entire bottle of vodka,” he says, his words slurring. Video shows him crawling around on the floor, and several people have to help him walk to the stage. Dr. Phil says, “I’ve never talked to a guest who’s closer to death than this one.”

The syndicated show has yet to indicate when this episode will air.

Update: Here are details on Todd’s appearance on Dr. Phil from an audience member.

Some delusional people with the ability to post on the Internet are convinced that this is an act, because they heard him on a podcast or saw him at a charity event and he was fine that time. But those who actually know him are expressing concern. Survivor China runner-up Courtney Yates tweeted a photo with “Todd -n- Courtney 4 ever” on it, while Russell Swan wrote, “I am praying for” Todd. “He was my roommate some years back. He is my brother now. One day at a time…”

Todd won six years ago this December; he was 14 when Survivor debuted.