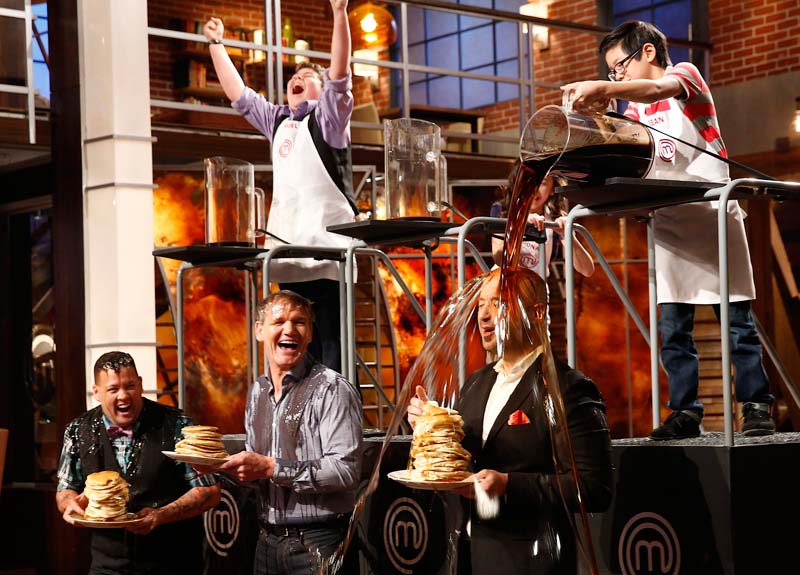 The first season of Fox’s Masterchef Junior spin-off concludes tonight, and it’s enough of a success that the network is casting for a another season. After a rough start, where the show unnecessarily eliminated a bunch of kids after a sudden-death round that did more to complete the casting process than anything else, the remaining episodes have shown off the chefs’ incredible talents and proven once again why kids make great reality show contestants.

I have strenuously objected to shows that exploit children, encouraging people to not watch Dance Moms and Toddlers & Tiaras, calling them a form of child abuse because they present a kid’s actual life and invite the audience to laugh at and ridicule them.

Consider how Jimmy Kimmel occasionally encourages people to “do something terrible to your loved ones” and put the results on YouTube. Doing that with consenting adults is one thing, but a lot of these experiments involve kids. Most recently, as he’s done for the past few years, he asked parents to film videos of them lying to their kids about how they’ve eaten all their Halloween candy. Their reactions may be funny, but once you think about what’s happening, it’s pretty sick.

A professor in Kansas State University’s psychological sciences program told the Washington Post that it’s even damaging: “Pranking your own children is not harmless fun, but is cruel and potentially damaging. […] A parent who would violate this trust for a big laugh or 15 minutes of fame is, in my opinion, acting irresponsibly and not looking out for the best interests of the child.”

Masterchef Junior is a masterful example of how kids can provide entertainment but also be treated with dignity.

The Fox competition series looked after its cast of minors: there was a paramedic following every single kid in the kitchen, and their parents were on set. In addition, producers decided to eliminate two kids at a time, so they weren’t alone in that process, however difficult it may have been.

Also, the chef/judges–Gordon Ramsay, Graham Elliot, and Joe Bastianich–have kids in the same age range, which certainly helps them treat the kids fairly and conscientiously. “We let them down gently. We managed their expectations. But, listen, they’re kids. We weren’t blowing smoke up their backside and telling them they’re going to become superstars. We kept it pretty much real,” Gordon Ramsay told TV critics this summer. “I’m brutal. I’ll get straight to the point. And the kids, I think, welcome that. Like I said, we weren’t wrapping them in coddle. […] I felt at times that I was talking to my own kids. But I think being firm and fair is something that we cannot be short of in any country, and brutally honest, they are all so well respected.”

That definitely shows. And I think it’s okay to expose kids to reality: criticism of their work, success, and failure. Reality series and/or competitions that take place in artificial environments seem better suited to protecting kids in the ways they need to be protected, in part because they are not filming their real lives.

For example, Kid Nation was great in part because it trusted them to function without adults (though, of course, it was an environment that was monitored by producers and crew members). If anything, we screw kids up more by treating them as if they’re incapable of comprehending things or acting responsibly–never mind lying to them, whether we’re withholding information or telling them they’re better than they are. We definitely hurt them by violating their trust, like the parents who use their kids to make themselves laugh or get themselves on TV.

Masterchef does the opposite, and treats its contestants well. Still, I think it’s reasonable to have concerns. The casting site is directed at parents (“If you think your child has what it takes to be the next MasterChef Junior…”), which both makes sense and seems to invite stage parents to offer up their kids to Hollywood. And I’m sure there are still some assholes using the Internet to say abominable things about the young cast members.

Producers and networks have a responsibility not just to care for their young cast members on set, but do their best to care for them after production and when the show airs, preparing them for the reality of life on and off a reality series, such as encountering criticism or ridicule from strangers online.

Masterchef Junior‘s only real flaw is that it sticks to the formula of its sibling series, which means long, drawn-out, allegedly dramatic pauses and a format that benefits from fast-forwarding. Though seven episodes for this compared to 20 for the regular show is a significant improvement, it still drags and drags sometimes. But when these incredibly talented chefs–who just happen to be kids–are on screen showing off their craft and getting feedback, that’s when it shines.