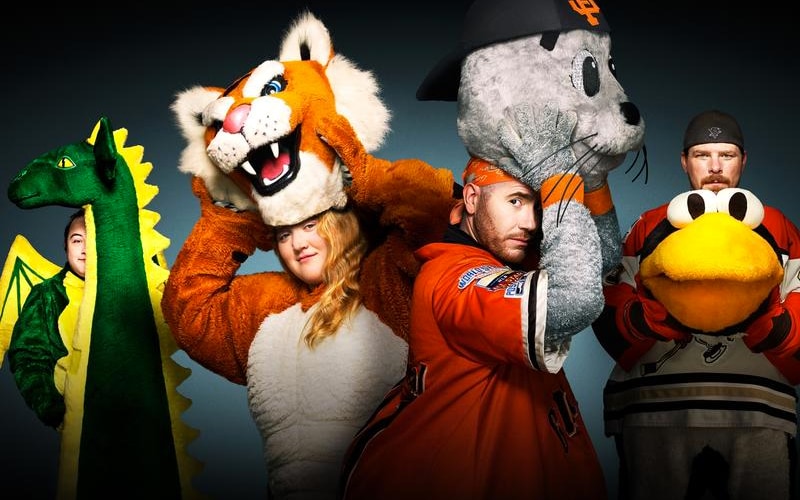 The best new reality TV series this fall is not actually on a television network: It’s on Hulu, and it is Behind the Mask, Josh Greenbaum’s documentary-style reality series that follows four mascots and the people behind them.

The show smartly follows four different mascots: Rooty from Lebanon High School, Hey Reb from UNLV, Tux the Penguin from a minor league hockey team, and Milwaukee Bucks’ mascot Bango. There is plenty of footage of the mascots in character, performing for crowds large and small, and the series has a lot of insight into their jobs, but it’s mostly about the people behind the costumes, as the show’s title makes clear.

Despite being people who live in the spotlight, these are not typical, self-aware, camera-hungry, Bravo-style reality show cast members. They are people who struggle with small but important problems, who say “time to make the donuts” with no irony or make you laugh with their wry observations. These are people you want to spend time watching.

NBA mascot Kevin does insane stunts but also performs with his family, and is loving with his own kids yet also tries to make a kid cry by scaring them while in an inflatable version of his costume at a mall.

Michael is an awkward teenager who suffers indignity after indignity, such as having to cheer for the bowling team, but comes alive when he’s in the mascot costume. Chad has ambition to be more than a minor-league mascot but is also remarkably innocent in his play as his character–and in his life. Sixth-year college student Jersey finds so much meaning in his job that you feel the pain of his impending separation from it.

There is no fake conflict, no bullshit, just life, such as it is for these mascots.

That said, there are several instances of the show’s four primary cast members reading obviously written/fed/scripted lines, which attempt to fill in narrative gaps and also establish stakes. But those highly unfortunate scripted lines stand out in their awkwardness—especially because their in-the-moment insights are so much better.

Consider the episode-one interview when UNLV’s mascot, Jersey, shocks himself when he says that, since he’ll be giving up the mascot at the end of the school year, “I’m losing a friend.” He realizes, “I’ll cry on graduation day” over that loss. In a later episode, he says his time on the court is a religious experience. This is his life.

The series is surprisingly emotional, and there are moments in several episodes that are rather small but so powerful, even devastating. The mascots’ anonymity makes for an interesting dichotomy, and the anonymity of the costumes allows them a combination of freedom and constriction.

The series touches on some interesting ideas, such as how education can take a backseat to athletics, and just how much our society values athletics, never mind our identification with teams and their mascot representations.

That said, while the series arrives at a time when there’s renewed conversation about racist mascots, there isn’t really an attempt to look at mascots on any kind of critical or historical level. (There is possibility for that, though: UNLV’s Rebels have a mascot, Hey Reb, whose origins are in a Confederate soldier character.)

Too many web-based reality series have little attention to craft, but this is a series worthy of an HD TV, from well-framed shots to the time-lapse opening sequence. That said, despite being online, the show still has those annoying, insecurity-drenched pre-episode previews that give away what’s coming in the episode.

But those really bad decisions are overpowered by the strength of the people the series follows, and spending time with them in and out of costume makes for incredibly satisfying television.

Behind the Mask: A
0shares