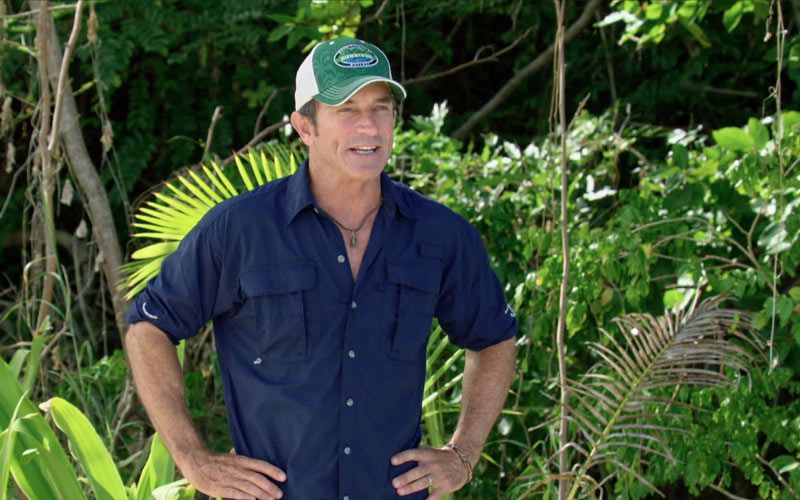 Jeff Probst, host and showrunner of Survivor. The theme and name for season 35 has been leaked online. (Image by CBS)

Last season was an example of everything that’s great about Survivor: the right kind of returnees; strong casting; and smart challenges, game play, and social strategy. Survivor Caramoan‘s fifth episode last night was the culmination of everything that has been wrong with Survivor in recent years, all magnified and held up into the light so that it’s deepest ugliness was clearly revealed. The contrast is so striking, so profound, that it’s devastating.

Brandon Hantz’s exit could have been due to a range of things, from emotional instability to pre-planned strategy (he’s been threatening this for weeks, and finally found a thin excuse to make good on his promises). But what it was, unquestionably, was disturbing.

I’m not going to be Dr. Drew and diagnose someone I’ve only seen on a heavily edited TV show, but the episode came close to doing so, trying to establish Brandon as crazy, but mostly by having the other cast members describe him that way. Corrine called him “loco,” “unstable and unpredictable,” and Phillip repeated the word “unstable.” Andrea said “Brandon seemed sullen” and needs to “get right in his head.” And even Brandon told us, “I gotta keep myself under control,” as if he was going to explode at any minute.

For the record, Jeff Probst said pre-season that because Brandon “was so combustible,” “we all kind of thought, hmmm, not sure we should ever bring him back. And then a little time went by, and he talked to us, and we talked to him, and our psychologist talked to him, and he sounded like he was going to be okay.”

Probst reiterates that and attempts to stop the rumor mill by telling EW, “every contestant on Survivor undergoes an evaluation from our show psychologist each time they play. We never let anybody on the show who can’t pass the psych test. Brandon passed. He was also great in our interviews before the show began. We were actually very excited because he had a new approach to the game.”

But no. Actually, no. Stop. Gordon Holmes reveals that pre-game, “Brandon was ready to flip out in an air-conditioned office.” If it was clear to a mild-mannered, nice guy of a journalist that Brandon was ready to freak out, that could not have gone unnoticed by producers.

Gordon observes, “What did they expect would happen under the stressful, luxury-deprived conditions of ‘Survivor’? Actually, that’s probably exactly what they were expecting…”

Yes. Brandon was cast for this episode, basically, which gets Survivor closer to being scripted than it ever has been before. Even in the recap, Probst said with glee, “The entire tribe was left wondering what he’d do next.” What we saw on TV during his first appearance was someone who was affected in all the wrong ways by the stresses of the game, so it is of zero surprise that would happen again—and more dramatically, considering the way being on the show affected his life off the show, as he told Probst later in the episode. So, they exploited him.

At first, his fellow returnees’ protests didn’t match the footage: Brandon seemed calmer, more together than he has in previous episodes. And his frustration and fight with Phillip wasn’t that unusual on any level, and certainly high emotions can be part of the game. It was clear we were being set up for something big by the editing, and not just Brandon’s irrational dumping of the rice and beans in order to give Phillip a reason to vote him off. That was uncomfortable, but by no means unprecedented.

One of my biggest issues with all this is that Survivor keeps breaking its own rules. Having permitted cast members to destroy each other’s personal property in the past, they have ignored their own rule book and thus made it irrelevant, encouraging more and more bad behavior.

Also, just threatening Phillip—”I’ll come over there and knock your fucking head off”—was enough to evict him from the beach. It pains me to say this, but it’s here that Big Brother does better: it actually does remove people for making threats.

The whole challenge beach drama seemed like a charade designed to get every drop of drama out of this moment instead of just doing what was right. Even the shenanigans that have been revealed over time seem less egregious than this.

Corinne’s announcement that they’d forfeit seemed less like the tribe came to that decision—or else we would have seen them deciding as a group, right?—and more like they were told that’s what they should do, or had to do, to resolve this. And not bothering with a vote because Jeff Probst apparently actually feared sending Brandon back to camp made Tribal Council the stand-in for producer action.

Having a spontaneous challenge location Tribal Council may have made sense, but not having secret ballots for the first time ever upends the credibility the game has. The tribe was basically being forced to eliminate him, which they may certainly have wanted to do, but either remove him from the game or have a credible vote. Don’t hide producer actions using the game’s elements.

What was more difficult for me than Brandon’s meltdown and Phillip’s response (for so much of the episode, Phillip responded to Brandon beautifully, but that was not true at the challenge location) was seeing the reaction of other returnees. Dawn in particular seemed devastated at what was happening and that she was being subjected to this. “I just don’t want to be here,” she cried.

Probst insisted to EW that “the overriding concern was the mental and physical health of the contestants.” But that was not evident in how this played out, not for Brandon nor the other players.

I hope the other returnees will have the courage to reveal what really happened—on the beach and before the improvised Tribal Council, including their interaction with producers and Probst—whether that account challenges the episode’s narrative, the producers’ version, or fans’ assumptions. We need to know what really happened to make sense of what we saw.

Let’s not forget that Jeff Probst is now the show’s host, executive producer, and showrunner, which means he’s in charge of everything on location. Even if you give him the benefit of the doubt and believe everything he said in the pieces linked above, once the meltdown happened, he should not have turned that into a spectacle.

Jeff Probst’s deplorable decision to tear into Brandon, masking that as concern, was insane. At the height of Brandon’s rage, Probst massaged Brandon’s shoulders, both attempting to calm him down and keeping him away from the others, and then brought up Russell Hantz. Probst decided to turn into a talk show host and/or gotcha journalist, trying to get a reaction out of his subject.

That was unforgivable, Probst at his worst, not being a stand-in for viewers but someone who’s creating the game in his own image based on his own values. That is not the Jeff Probst I love.

Before this season, Jeff promised that “Season 26 is better than season 25.” While we have nine episodes to go, this episode is a huge mark on the season and franchise, and it’s sad that he’d prize a season with this episode over a season with such uniform strength.

That Probst likes a season that had this awfulness may be problematic, but it’s predictable. Probst has admitted getting bored and stirring things up as a result, and this could easily be seen as an extension of that attitude.

Survivor Caramoan may rebound from this. I hope it does. Survivor probably will not, because under Jeff Probst’s stewardship, this is the direction in which Survivor has been moving: volatile personalities instead of strong personalities; drama over game play and character development; and a relentless focus on the things Jeff Probst values.

Graph the arc of the show over recent seasons and there are anomalies, but the overall trajectory is clearly in the direction of what we just witnessed. This is the show’s sad future.