There isn’t really a need to prove that Food Network’s awful reality series Restaurant Stakeout is a fraud: it oozes inauthenticity in every frame, and people featured on the show have described how fake it is.

But here is hard evidence of its fakeness: a casting notice “seeking male or female to play waiter at BBQ restaurant.” The project name doesn’t even attempt to conceal what it’s for: “Restaurant Stakeout (NJ).”

Casting producers want a man or woman 25 to 35 of any ethnicity “to play a waiter or waitress at a restaurant in Somerville, NJ. Commitment will be one to three days of shooting, $120/day.” There is also “$60/day (to be used on restaurant meal),” though it’s not clear if that’s in addition to the $120 compensation.

Actor and comedian Anthony Devito first noticed this and sent me the full casting e.mail message (below) from Casting Networks’ posting.

I’m heartbroken that this comes from the network of Bob Tuschman and Susie Fogelson, but even more sad that this is increasingly becoming acceptable behavior. 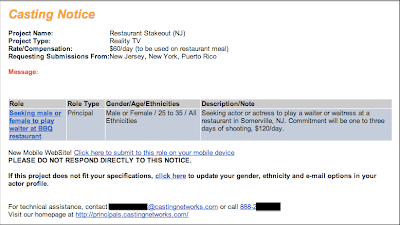