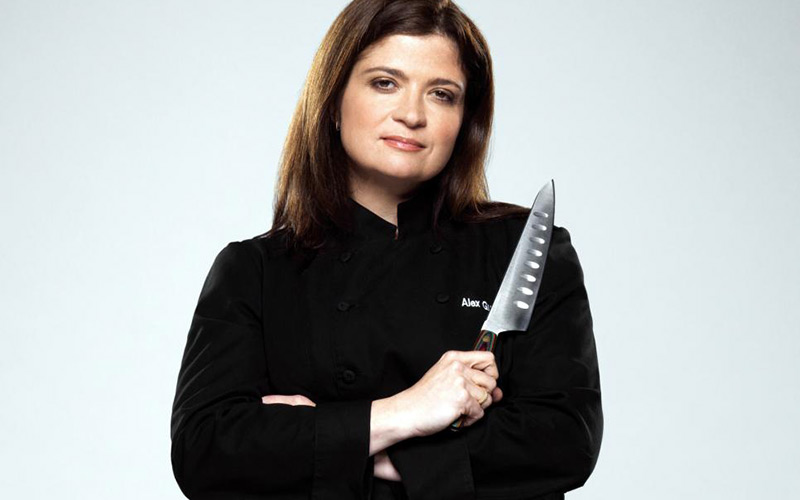 Add in competitors such as Top Chef‘s Spike and Marcel, and it was a very reality TV season of the Food Network reality competition, which has found its groove in recent seasons, and bringing back familiar chefs was an excellent choice.

“I feel like a princess,” Alex joked when I talked with her a few days ago. Deciding to return obviously paid off, but as she told me, “having a 10 percent chance of winning something and doing it twice is maybe not the most rational thing, but it’s just something I’ve always wanted, and I feel like if you are privileged enough to have a second chance at it, why not?”

While returnees on other competitions often have an easier time–ahem, Boston Rob–Alex said that here, “there’s more pressure because you’ve done it once and you’ve made some mistakes that you’ve thought about every day in the shower. For the past year.”

She told me that “the most difficult part was putting aside the relationships I had with other fellow competitors and putting aside what I felt I was obligated to do, and just try to make delicious food.”

I asked if there was professional risk associated with competing on a show like this, where even the smallest mistake can be embarrassingly highlighted.

“Chefs take that risk every day by having restaurants and making themselves vulnerable to public opinion, it’s just that Kitchen Stadium might have a little bit more of a reach,” Alex said. “You only hope that people respect that you want to put yourself out there.”

At the end, Alex’s finale competition was Amanda Freitag: two Chopped judges being judged in part by another Chopped judge, Geoffrey Zakarian, who won last season of The Next Iron Chef. Alex said their pre-existing relationships didn’t impact the competition.

“Geoffrey Zakarian is an extremely objective human being who leave emotion out of food when he needs to, and I think for me, Amanda, and Jeffrey, it was complex but it wasn’t an issue,” she said. Geoffrey was like any other judge to me.”

How did her experience judging a reality cooking competition affect her on this show? “You second guess everything that you think you want to make, and you wind up psyching yourself out of a thousand things,” Alex said. “You have to try to leave the judging aspect out when you compete. I auto-judge and auto-chop myself a gazillion times. It’s like autocorrect on your phone.”

I’ve always been baffled by how Next Iron Chef contestants make just one plate during their brief, allotted cooking time, but then have four plates ready for the judges. When are the other three prepared? And how does the food not get overcooked or cold during the significant amount of time it takes to judge the other contestants?

Alex explained: “We have to prepare the food for all four plates, and then you can just reheat certain elements. So when time is up, you’ve made enough for more than just that one plate, and when it’s your turn to be judged, you warm up the rest of what you’ve made and serve it to the judges,” she said. “It’s what they call a reheat. You can’t clean one piece of shrimp and then when it’s time to cook for the judges, clean the other shrimp. It all has to be ready to go.”

Overall, Alex said that this show is a great platform. “I think it’s amazing that chefs have the opportunity to express themselves in this way. It’s so much about time and competition and getting it done, but it’s also about artistry and expression,” she told me.

“As far as Chopped goes, it’s amazing how easy it looks like when you’re on your couch, and how hard it is when you’re there. People forget that.”