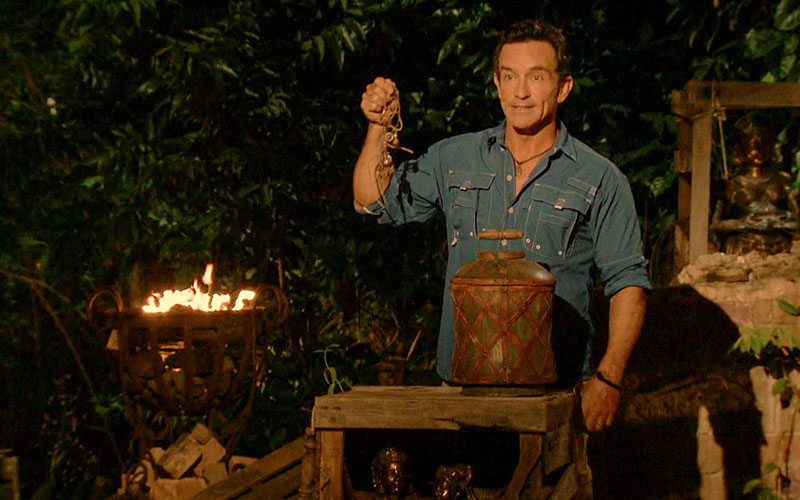 Jeff Probst with a hidden immunity idol played during episode 9 of Survivor season 35.

Hidden immunity idols have been a dramatic addition to and/or scourge on Survivor for years now, contributing to both stunning, memorable game play and to to the survival of people who would have exited the game if it were not for the downpour of idols with neon signs pointing at them.

While we’ve known that one can’t steal an idol from someone’s possession, someone asked on Survivor Sucks what would happen if someone dug up a buried, hidden idol that’d already been found, which seems different than one that’s in someone’s bag or pocket.

A long-time Survivor Sucks poster previously identified as Survivor One World cast member Colton Cumbie answered–and the answer was revealing about both the rules regarding idols and things that happened off-camera:

“No, he can’t take it. I had hidden my idol in Samoa, and Bill dug it up and threw it out to sea. I didn’t know who did it at first, and I threw a fit. Production basically pulled EVERYONE aside one by one and went on a scavenger hunt to find it. I thought MIKE had taken it, but he swore on his mom’s life it wasn’t him and then I turned my sights on Bill. Leif, ever the squealer (lol), told me he saw Bill throw something way into the ocean. At that point production was questioning Bill, and then about 30 minutes later production returned with me my idol. So I think once you have it it’s YOURS unless you specifically say, ‘I want to give it to [Survivor]’

Another thing is when I was medically removed I didn’t have the idol on me. They had to ask me who I wanted to give it to. I didn’t even think about the idol until Jeff asked me about it and then a member of production brought it over. I think if it could be taken they would’ve just removed me and left it until someone said, ‘Oh my God! I can take this for mine now.’

(When Bill threw my idol in the ocean is when I started hating him, but we were told it couldn’t be discussed on camera and everyone was to act like it never happened because it’s against the rules to TAKE someone’s idol no matter where it is.)”

That explains, although certainly doesn’t excuse, some of Colton’s awful behavior. If what happened above is even partially true, it’s amazing that didn’t end up on TV.

The prohibition of discussing this on camera is, for me, the most incredible part: it’s one thing to not actually show something, because it takes too much time or is overly complicated–though if this version is accurate, it would have given both context and great drama.

But it’s another to tell contestants they can’t explicitly talk about something that actually happened, and I’d be very surprised and/or disappointed if that happened.

Asked a follow-up about what would happen if someone did find a cast member-hidden or -buried idol, he speculates:

“Yeah, I think if anyone got close to it cameras would be already following them. So if they went for it they’d either be pulled for a confessional or told to go somewhere else to get them away from the area, and if they physically picked it up they’d be told someone else is in possession of it.

Finally, he speculates that this rule is for a very practical reason: Without it, everyone would just keep stealing the idol from one another and do nothing except that, and that makes sense.

Although the producers certainly do love their searching-for-idols footage.