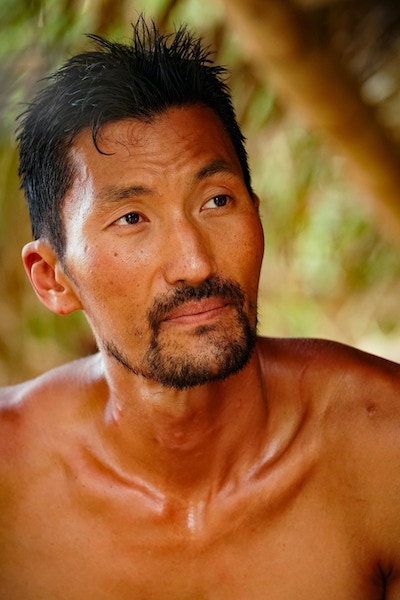 The finale of America Revealed airs on PBS Wednesday at 10 p.m. ET. It is most notable because it is hosted by Survivor Cook Islands winner Yul Kwon, and I say that because the series’ ambitions have hobbled it, and even his charm and intelligence can’t rescue it. (All four episodes are online.)

It’s an informational documentary series about systems–transportation, food, power, and manufacturing–that mostly comes to life thanks to Yul, who gets into the middle of the things that he’s talking about. Some of his stand-ups and other shots are gimmicky and unnecessary, but they’re fun and photographed beautifully. The editors do great work, too, such as zooming out from Yul atop a structure all the way to space, and repeatedly illustrating how things move with streaks of light on darkened maps.

While it focuses on the ambition and impressiveness of the systems that have been created, it all but ignores the consequences of those systems, and that is its flaw. The show’s lack of critical perspective–or even any hint that what it covers might not be entirely positive and worthy of celebration–is disappointing, though that’s by design.

The series, via Yul’s narration, presents its findings and information in a way that almost makes it seem like an advertisement for industry. That’s not to say that the information is inaccurate, nor that we shouldn’t learn about things that exist and the people who make them work, but it’s weird to talk about, say, food supply and agriculture without at least acknowledging how completely screwed up some of it is. For example, Yul tells us that fertilizer from the chemical industry “revolutionized farming,” and a farmer he interviews says that fertilizer has “improved everything.” And the chemicals we’ve pumped into our food, water, and land haven’t done anything else?

Later, when exploring beef cows, Yul asks a farmer if the goal is to “fatten them up in the shortest amount of time possible”–a hint of critical perspective there–and talks about growth hormones by calling it “a new kind of animal, an animal bred and raised to meet the demands of the producer and the consumer.” Just when it seems ready to at least mention a consequence, we then see a cow processing facility with not a single mention of the problems other PBS shows have explored. Ditto with GMOs, and corn, et cetera.

Learning about systems is interesting, but I often felt like I was being treated like a third grader who couldn’t handle complexity and, at worse, was being lied to because I couldn’t handle the truth. At the most, the series touches the surface of problems (“How can we feed ourselves in a way that’s healthy for us and sustainable for the environment?” Yul asks at one point), but rarely makes its viewers aware of those consequences in any meaningful way.

That was actually intentional.

I talked with Yul last summer, while he was still taping the series and before any footage was available–the logistics of filming meant that instead of a three-month shoot, it took more than a year. He said the series would be “really important in terms of helping our country” because “we’re at a really critical time in our nation’s history” and “DC’s gotten really partisan and it’s hard in that environment to get a lot of stuff done. It’s hard to get people to focus on things that matter.” So, he said America Revealed “engages a broad audience of people on things that are actually really important and we should be talking about and sort of educates them so they have a baseline of information, so it does it in a way that’s a lot of fun.”

He talked specifically about the media, which is now very “niche-oriented,” and said that “people watch the things that only reaffirm their existing worldviews, so the problem now is that there’s no baseline of common knowledge that allows people to have a real discussion. People are talking past each other on the left and the right; the great thing about this show is that it’s non-partisan, but it really kind of explains and tees up a lot of these issues, so that people can start thinking about it and having that foundation for having an intelligent discussion.”

So this PBS series, which he was recruited to host while working for the government, is “trying to convey the magnificence of this country” and “give people an understanding of these vast infrastructures,” and while it “raises some of the challenges,” it primarily exists to show the “big picture” and “talk to the people who are bringing these systems to life.”

That’s a noble goal, and one I can appreciate. But I think that fear of seeming partisan pushed the documentary too far away from facts. It doesn’t have to be a brutal takedown of these industries nor make an argument like some works of nonfiction, such as Food, Inc. or the awesome Eating Animals, definitely do.

The irony is that, in Yul, it has a host who’s witty and intelligent, and someone who’s capable of navigating complexity and consequence while still not turning this into something that’d turn people off by default.

On another note entirely, Yul told me that, while filming the show and its epic shots, he was faced with his fear of heights and his claustrophobia, sometimes at the same time. “I’ve been more scared filming this series than any day I was on Survivor, by far,” he said. “Half the time I’m curled up in the fetal position, thinking I’m going to die.” After mentioning the show that made him famous, he also said, “I don’t want to be known as the Survivor guy for the rest of my life, especially now that I have a daughter. I don’t want to spend the rest of my life known as that half-naked guy on Survivor; I’d rather be that smart Asian guy on PBS.”

That’s a real possibility, considering that he’s the best part of this series.