When I spent a weekend with Ben Wade earlier this year, I could never have imagined that he’d be back on Survivor a few months later, nor that his religiosity would play a major role in the game.

But as my Playboy article hit newsstands, he was in Samoa, praying with his tribe.

One short scene that I wrote in an early draft that didn’t make the final piece reveals a side of him I didn’t know about until I visited Susanville, where he is a coach, conductor, and pastor.

I didn’t know how deep his religiosity was, nor was I aware of his fundamentalist beliefs.

It speaks, I think, to the genuine nature of the beliefs we’ve seen become part of his game this season, even when they’ve manifested themselves in questionable ways (e.g. praying to find the immunity idol when he had it).

First, here’s a deleted scene from the article.

“I went through a lot, man,” Ben tells me. “I really feel like they really damaged me, and if I weren’t a Christian, I’d be screwed, man.” He shifts his Jeep, his hand on the steel bulldog that’s perched atop the stick shift. Ice patches on the two-lane road breathe steam into the early morning February air, and in the forest of well-spaced evergreens, translucent walls of white appear and fade as gravity wins its battle with snow piled on the tree’s branches.

We’re driving to Eagle Lake Community Church, where Ben has been pastor for about a year. Behind us is Susanville, the town Ben calls home and the subject of a PBS documentary called Prison Town, USA, because its prisons contain about a third of the county’s population. Susanville was also the subject of a documentary called Small Town, Big Symphony, about Ben Wade, maestro, produced by his brother, and focusing on the symphony orchestra Ben helped found in 2003.

Sometime after Survivor, while he was wading in the shallow pool of post-fame fame-seeking that so many attention-drenched reality TV show cast members dive into—he was even offered his own dating series like The Bachelor—Ben moved back to avoid the temptation of fame. “I would have let them do anything they wanted to do. You become a whoremonger: You’re never satisfied.”

Trees turn into snow-covered houses along a small grid of streets. The church is a tiny building, one that has bookshelves in its bathroom and a cross made of seashells on the wall. “Ben, you rock,” someone says, and nearly every one of the 20 or so people there greet him as he takes off his coat.

The program for the service says “I Am God” in bold letters overtop a stock photo of snow-capped mountains, not the actual snow-capped mountains that surround this small town and are visible outside the window as everyone settles into plywood pews while Ben plays trumpet over pre-recorded music that sounds like the demo on a Casio keyboard.

In all capital letters, the script font announces that Pastor “Coach” Ben Wade will preach about “The Second Coming.” The service takes just over a half-hour, and includes detailed review of Biblical passages about the rapture, the end of times, and something about flying around heaven.

“It’s already been mapped out what’s going to happen,” Ben says, promising comfort to the congregation. Ben references his kayaking trip and tells the congregation, “I didn’t know if there was going to be a good ending or not. The easiest thing about Survivor was knowing that there was a beginning and an end, and that there was a safety net. This is here to let us know that no matter what happens, God is in control,” he says. “It’s already been written in the book that Satan will be destroyed at the end of the time. He will be tormented day and night, forever.”

Coach on religion and his faith 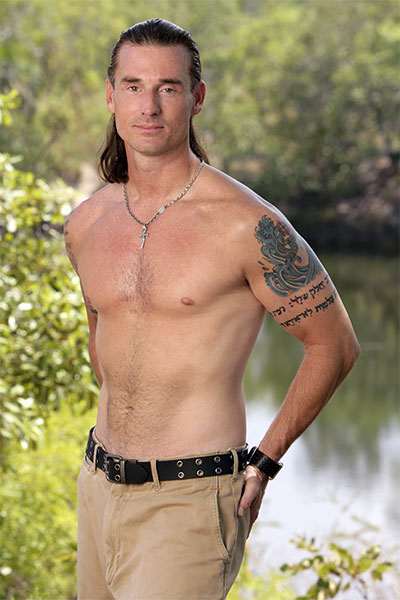 During our interviews for the Playboy piece, I asked Coach about his sermon and religiosity, and Coach explained:

“Having a Christian faith permeates everything that I do, and I have sins that I struggle with just like everyone does. I believe that the creator of the universe is God, I believe that he has a son, I believe in the power of the holy spirit, I’ve seen it, I’ve felt it, I’ve heard God speak to me; on some of my lowest points I’ve felt his hand on my shoulder. I’ve been in some very powerful moments with him that have made it real and not just a doctrine in going to church. And I do things kind of to the extreme, so for me to feel God in the extreme, I feel—well, let me just say this, I feel–during my sermon yesterday, I got emotional a couple of times, just as I was speaking, because I feel so unworthy of being able to speak the gospel.”

“I’m amazed that through all of my rebellious and sinful ways that God is still compassionate enough not only to forgive me but to use me to speak. And there’s a big difference. My father speaks every week in church–he’s an ordained minister; he does mathematics but he actually got ordained as a minister. And I remember listening to one of his sermons one time–he does Sunday school but he also does some church–and I remember in the middle of a sermon he stopped speaking and he said, ‘I have nothing to share, and I feel like God is not speaking through me and so I’m just gonna stop.’ And he just stopped right in the middle of the sermon. And it was very powerful for me to see that, and I feel the same way. I know when I’m speaking out of my own knowledge, and I know, and I can feel, and the congregation can feel when the presence of God is there in the room.

It says in the Bible—and I believe it cover to cover—it says when two or more are gathered in his name he’s gonna be there in the midst. God is infinite, he can be in a billion places at once. It’s hard to comprehend, but that’s what it says. So, you know, I feel the power of him in that room–I felt it yesterday, I felt it the week before. There have been times when I haven’t felt it as much, and when he starts speaking through me I’m actually teaching myself along with the congregation. I will take that drive up there through the snow every week, just so that God can feed me spiritually.”