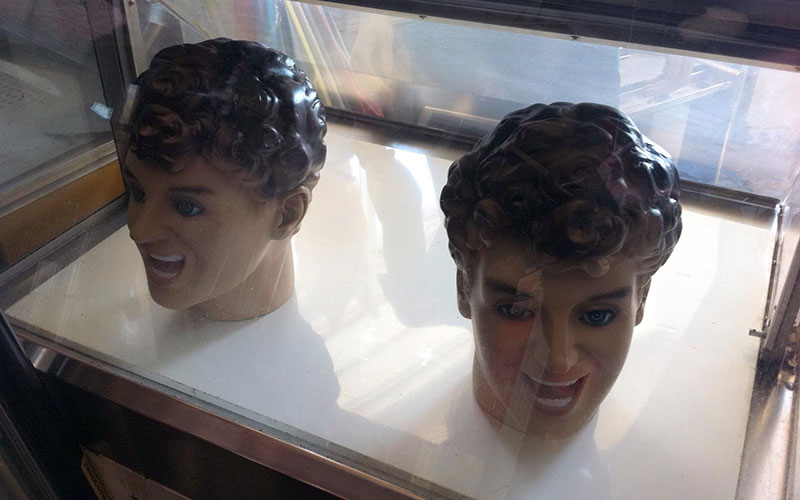 Two Randy Senna mannequin heads in a case at Randyland, which was featured in a Hoarders season 4 episode. (Photo by Andy Dehnart)

Half of last night’s episode of Hoarders profiled Randy Senna, the proprietor of Randyland in Wildwood, New Jersey.

(The other half profiled Vicki, a hoarder who essentially rejected the help that she desperately needs; her conflict with the crew and her family made Randy and Matt Paxton’s conflict seem inconsequential.)

The episode filmed over the weekend of March 25, and I was there for two full days and part of the final day to write about the show for Playboy.

The article covers a lot of the behind-the-scenes interaction, and some of what happened on camera, including Randy and Matt’s fight, which lasted more than 25 minutes in real life—longer than Randy’s story took to play out during the episode. (You can watch it online or download an HD version.)

I actually have a cameo in the episode, despite my best efforts to remain behind the cameras at all times: Right after the 40-minute mark, before Randy and Matt fight about moving the machine, I’m visible on the left-hand side of the screen.

The publicist in charge of supervising me also has a cameo: He walks quickly to get out of the shot right before the fight. He is also credited as a Location Scout in the credits, thanks to his suggestion of the shot of the Wildwood sign and joking with the episode’s producer that he get credited for that.

The magazine piece covers a lot of the details that didn’t make it into the show, which had to compress time (just as I had to compress and limit my observations in the story), but it was still shocking to see that.

Five seconds of moving machines on screen was an entire day in real life. Dr. Suzanne Chabaud, who’s totally awesome in person, spent a lot of time talking to Randy and the cameras, but very little of her insight made it on TV.

The producer and editors pick the best, most representative moments, and that stands in for everything else.

The only real discrepancy I noticed was the introduction, as it made Randy seem crazier than he is.

I don’t think that was by design, but editing him down to soundbites doesn’t illustrate his analytical thinking or his intelligence. He was often being funny and/or performative (you can really see that when he’s giving Dr. Chabaud the tour; he even glances quickly at the camera).

TV also didn’t do justice to Randyland: its scale (two stories of an old Woolworth’s), its detailed displays (from Walt Disney World artifacts to Randy’s baby crib), or its organization.

There also wasn’t much time spent on the upstairs storage area, which was the real hoard, and which contained a lot of stuff that I’d consider trash (in the episode, Randy says, “there’s nothing here that’s garbage,” but while it was the cleanest hoard in the show’s history, that wasn’t entirely true).

A few other stray observations: