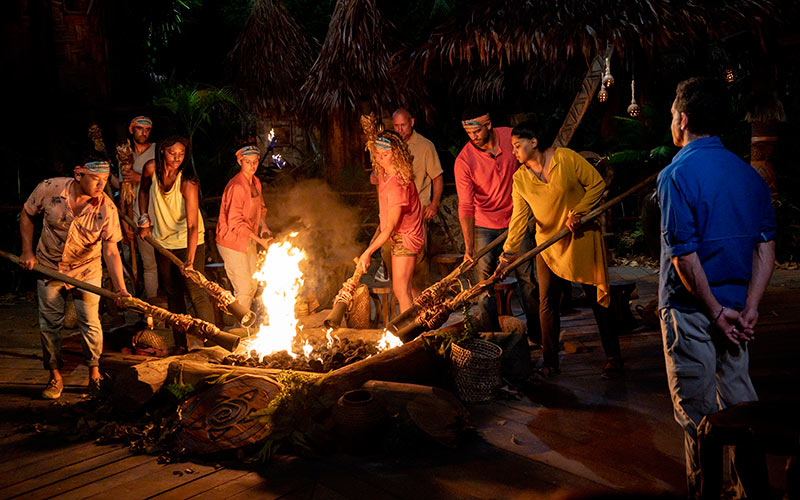 This moment from the Survivor Island of the Idols premiere, the Lairo tribe at Tribal Council, was spoiled in a mid-episode promo. (Photo by Robert Voets/CBS Entertainment)

One of the things that’s easy to forget or take for granted is how much detail and attention goes into everything you see on Survivor.

But it takes a lot of work and effort from a lot of people to pay attention to things that might never be seen on TV, or will only be seen for a brief moment.

In two new behind-the-scenes videos narrated by Jeff Probst, we see the construction of Survivor Redemption Island‘s Tribal Council and its first challenge.

The first behind-the-scenes video shows everything from the Tribal Council blueprints pre-construction to producers scouting the routes that contestants (and the Dream Team) will take walking in and out.

On my first set visit in Gabon, Tribal Council surprised me the most, because it’s literally a set, from the lights that simulate fire light to the actual fire, fueled by tanks of natural gas, and one that’s built to conceal all the cameras necessary to film the action.

The 18 construction workers who build it are just part of the 100 people who do everything from the set design to rehearsing and lighting the places where the contestants will actually sit.

Probst also practices how he’ll describe the challenge. It starts with a brief interview with my friend Mark Burnett and challenge genius John Kirhoffer (read more on how challenges are constructed and Kirhoffer’s role).