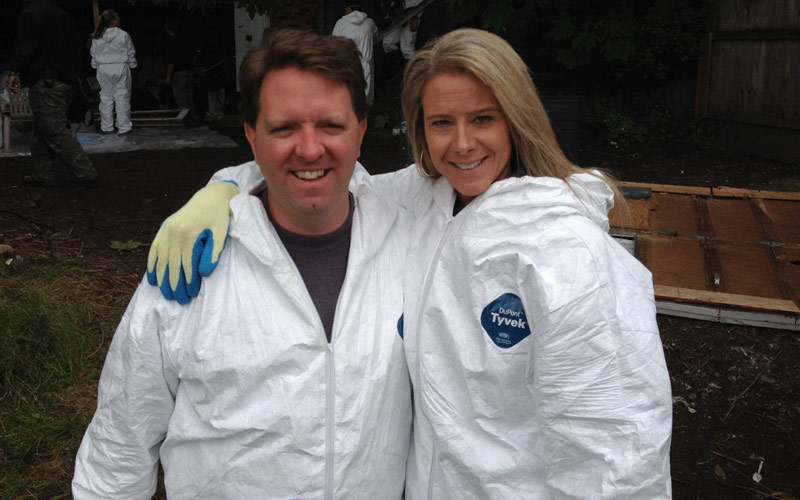 Matt Paxton and Dr. Robin Zasio during an earlier season of Hoarders.

As a reality show, Hoarders is kind of like Trading Spaces: the real people being profiled change every episode, but the show rotates through a central cast who we’ve gotten to know over the series’ life and become the heart of the series.

Sure, the hoarders themselves are often interesting characters, like Sir Patrick, at least until we found out he’s a felon sex offender, but the cast provides continuity that makes the show more entertaining because we’re seeing people we know.

Each episode follows clean-up efforts at two hoarders’ homes, and tends to include a therapist and an organizer at each house.

Sometimes the therapists are kind of duds as therapists and TV personalities, but along with the nameless, faceless 1-800-GOT-JUNK crews, the show has a go-to cast of therapists (Robin Zasio and Suzanne Chabaud stand out for me) and organizers (Geralin Thomas is probably my favorite).

Then there’s Clutter Cleaner Matt Paxton, who calls himself an “extreme cleaning specialist.”

At first I resented his contributions; as a non-therapist, he often seemed to be treating people with a mental illness as if they were stubborn children, not people with a disorder that causes them to not understand why, say, bags of human feces and decomposing kittens don’t belong in their home.

But over the series three seasons, I’ve come to appreciate him, especially as he pushes the hoarders to do more work.

Sometimes he’s an ass, and I wouldn’t mind the therapists stepping in to tell him to shut up, but sometimes he gets at the hoarders’ issue in a more direct and more effective way than the on-site therapist. And sometimes he just walks away.

On Monday’s episode, which was great until the depressing end title cards, Matt learned that the hoarder went shopping at the end of the first day. “It’s kind of a slap in the face to go buy something on the day of a clean-up. Why am I wasting my time here away from my family to help you if you’re going to go buy something?” he asked her.

Ignoring the obvious—um, Matt, it’s your job, and you’re getting paid and getting advertising for your work—the way he takes things personally is really anti-therapist, and it works, at least on the TV show.

Geralin is also really effective with people she helps, but she seems to take things less personally and is totally calm and mild-mannered.

With his more out-there behavior, Matt has become the best character the series has, because he has no filter and provides some necessary levity.

Matt says things like this, which he said when he was talking to a hoarder about a children’s book that had rat feces on it:

Hoarder: “Can I wash it off? I was going to give that to somebody.

Matt: “You can’t give this to anybody. I mean, I couldn’t, you know, take a poop on a gift and give it to you.”

Hoarder: “Does it smell, though?”

Matt: “It doesn’t matter. A mouse has pooped on this.”