I’m in love with Work of Art, Bravo’s latest competition series from Magical Elves, who gave us the now-lame Project Runway. I’m still unsure what I think of the judges, their critiques, and the overall idea of this being art, but as a reality competition, it works extremely well. The challenges are visual, so we can participate in the process, and like all Magical Elves series, it’s just well-produced.

Also, there are sufficiently crazy contestants, like batty and hostile Judith, who left this week. And on the other end, there’s Miles, who’s the perfect combination of exceptional talent, unexpected weirdness, and attractiveness. I already envision Bravo producing a spin-off docudrama following him; his facial expression after Judith talked to him this week and his glee about starting an electrical fire are enough justification for Andy Cohen to start the development process on Miles. 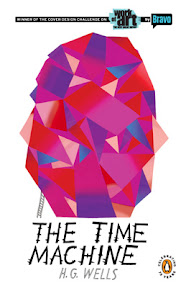 Anyway, this week’s awesome challenge was to redesign a book cover, and the winning cover (which was kind of evident throughout the episode) was designed by John Parot. His minimalist, awesome cover for H.G. Wells’ The Time Machine has been wrecked by the addition of Bravo’s logo, the show’s logo, and a stripe announcing that it was created for the show. It doesn’t obscure his work, but it changes the way it looks by interrupting the great negative space around the abstract time machine. The Penguin logo in the lower right-hand corner doesn’t really work, either, but at least it’s not at the top and thus doesn’t draw your eye away from the central focal point.

That’s too bad, because the design is brilliant by itself–I love the ladder–and because the art world may already view the series as a joke, so there’s no reason to reinforce that by wrecking the potential impact of the art on our culture with crass commercialism and network branding.