The Bachelor will be a Wii video game in which you can date bachelor/ettes, sabotage dates

The Bachelor will become a video game for the Nintendo Wii and the Nintedo DS this summer, and that game will give players the chance to date CG versions of five bachelors and five bachelorettes from the show. (Always read your contract closely.)

According to a press release, “players will compete in a collection of fun mini-game date challenges for a shot at romance” and “players compete to win the attention and ultimately the heart of the Bachelor or Bachelorette,” but “opponents can sabotage others’ dates and prevent them from receiving a rose or ring.” You can either play by yourself, moving through “episodes” as if you were on the show, or against friends.

Those date games are “fun challenges, puzzles and mini-games, which test skills such as memory, speed, observation and precision,” which means, of course, that it’s not realistic, because testing the actual contestants’ memory or speed wouldn’t help their chances.

And yes, there’s a rose ceremony. Here is an actual screen shot from the game, and this is (in case you can’t recognize him or his CG chest hair) Jason Mesnick, who may dump you and select someone else if you hold down the 1 and 2 buttons together: 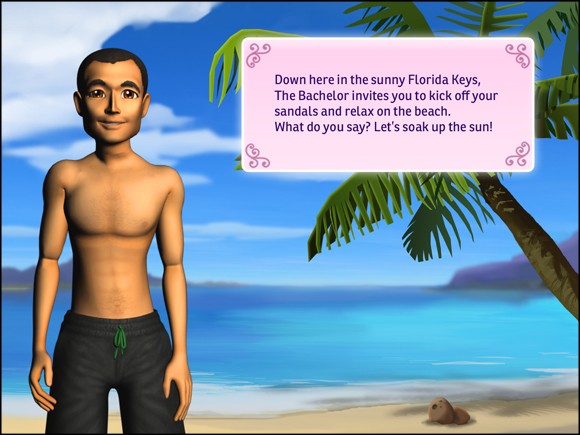 “Let’s soak up the sun?” I’ll bet if you push A you get to bang him on the beach.